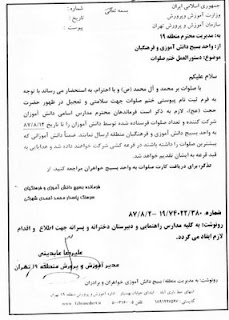 This is a typical memo sent to Baseej units at schools telling them what they should do and how pupils are forced to engage in pointless time wasting exercises.

Salavat is a chant, Shiite Muslims shout when the name of the Prophet is mentioned or when they want to show approval of something said. Hand clapping and whistling are frowned upon as Western traits and Salavat instead is encouraged. Salavat is a chant in Arabic which hails the prophet and all his family.

The memo is from 'Academic and Student Baseej' to the District 19 units and this is what it says:
'With Salavat to Mohammad (PBUH) and his family. With reference to the enclosed Salavat form for bringing closer the reappearance of the Lord of All Ages the saviour, it is of note for the commanders of all units to send in the names of the enrolled pupils and how many times they have chanted Salavat until this closing date..
Pupils who have chanted the most will be enetered in a prize draw and will receive prizes.
Attention! to receive the Salavat form refer to the Sisters Baseej units.'

Surely there are better things the Iranian pupils could engage their valueable time with.
Posted by Azarmehr at 4:00 AM

Thank you for the informative posts. I've learned so much. Would you mind taking my survey? I'm studying the Iranian Blogosphere. This is open to any Iranian blogger as well. Thank you!

There is no fun in Islam.

These young, so-called basijis are so ignorant and misguided that it's depressing. I don't know if I want to cry or kill somebody when I'm in Iran.

On one side of the spectrum you have these idiots (the basijis) and on the other you have people like Winston.

Hello
new here.Found this place after a sieries of going through blogs.Seems like a nice place. So what is this site exactly? What is Iran like? (I'm not from Iran).

In Iran, they say Salavat three times when the name of khomeini is uttered in public too.

Winston said... barmakiri, you're an asshole.
I second that !

I am surprised that Azarmehr allows his comments published here when this asshole clearly insults every one here. Well, all we can do is to insult him back.

I insult people? Who is the one who calls me barmakiri? Who never leaves any substantive contributions besides, "go away barmakiri" or "get a life" or "you're an idiot" or "you commie islamist," and whatever else you say.

I think you have mental issues sir. And insult me all you want. Well, you can at least try, but you don't have the ability to insult me. It's kind of like if a special ed. child calls me names; who can take offense to that since they're not in their right mind.

That's what it's like when you try to insult me. Haha. Maybe if you weren't such a hate-monger people wouldn't "insult you."