Today is the Press Freedom Day and to highlight the vicious onslaught on Iran's press by Ahmadinejad's administration, protesters throw 300 newspapers rolled into footballs over the IRI embassy gates in Paris, in a symbolic action against the messianic regime's crackdown on press freedom. Protesters demanded the release of all imprisoned Iranian journalists. There are now more than sixty Iranian journalists languishing in the regime's prisons.

The event was organised by Reporters Without Borders - RSF. See Pictures: 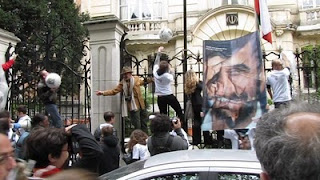 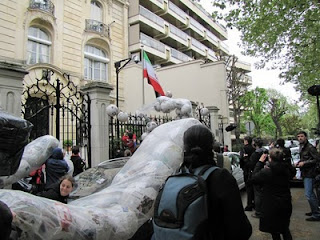 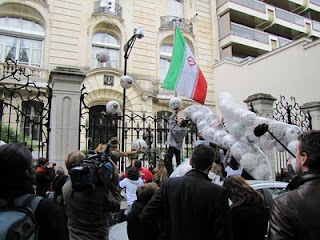 This provoked my envy and shame that nothing of the sort has taken place in the UK. Well done you great Parisiennes!

Great photos, I wish they'd managed to tear down that Arabic Onion flag while they were at it...

When you try to cage words and imprison dreams, then you can only live the Nightmare!