We Stand Against ALL Dictators

There was something different about the Al-Quds march this year. First of all the number of participants were remarkably less than previous years. After waiting for one hour, at the Portland Place, where the marchers gathered for more busloads to arrive, the policeman I spoke to put the best estimate of their numbers at around 300 max. 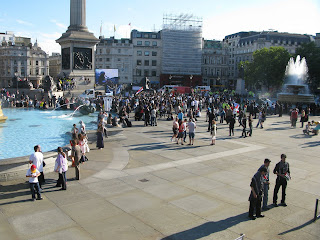 I also saw no flags of the Islamic Republic and no posters of the Supreme Leader this year. It was as if the organisers were more careful to hide the Iranian connection this time.
As usual there were hardly any Palestinians on the march, the rest were a hardcore of Iranian regime loyalists and Supreme Leader worshippers plus mainly Asian Muslims. There were very few English 'useful idiots' on the march this year, didn't see any Socialist Worker Party members or banners, there was still however at least one 'useful idiot' Leninist who joined the marchers with a red flag which had a hammer and sickle inside a five pointed star waving on the back of his push bike with cpgb written at the bottom of it, Communist Party of Great Britain, I assume. I always have the most contempt for these UK Communists who lend their support to IRI sponsored events. Do they not know how many young Communist sympathisers have been executed by the Islamic Republic? Have they no sympathy with the mothers and fathers who lost, in some cases all of their children who had become Leftist supporters after the 1979 revolution in Iran? Like the Behkish family for example, who had five of their children executed by the regime. It irritates me to no end to see these comfortable champagne Socialists never express an iota of solidarity for their Iranian comrades and yet march with their murderers.
I also saw one woman with peroxide hair, wearing a mini skirt in the march. I felt sorry at her stupidity, does she not know what would happen to her, if she went out in the streets in Iran dressed like that?
Most people we managed to speak to had no idea the march was organised by the Iranian regime and most of the ones who we managed to speak to, decided not to join the march, like these two Irish friends of Palestine who decided to leave after they realised the Al-Quds march was a propaganda march sponsored and organised by the Islamic Republic of Iran 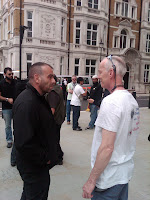 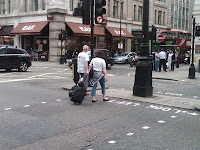 After all who in their right mind that didn't have a hidden agenda could argue with what we were saying? how can the Islamic Republic, which is neither Islamic nor a Republic and nor Iranian, and has brought misery, despotism and poverty for the Iranian people, liberate Palestine or anywhere else?
On the whole it seems the naked brutality of the dictatorships in Syria and in Iran has finally opened some eyes and it has definitely cost these dictatorships a lot of supporters.
Another thing that irritated me, was the two BBC Persian reporters who had popped out of their offices in Portland Place, to see what was going on. They were mingling and chatting with the IRNA reporters and when I asked them why they don't make a report of our counter protest and talk to us, one of them gave a condescending smile, saying there is only a few of you! Well if BBC Persian for once reported the event instead of copy/pasting its mundane news, may be more people would find out about what Al-Quds march is and join us. In any case what difference does it make how many of us there were, the important thing is we were being effective by talking to people and persuading them not to join the march and our message that the Islamic Republic or Bahsar Assad can not bring liberty for Palestinians was worth reporting. 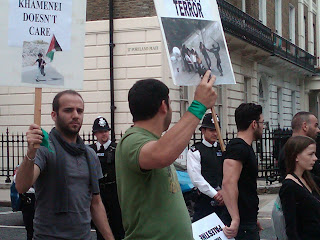 When I came home, the news was all about the Rebels closing in on Gaddafi. It looks like the Libyan dictator is seeing his last days in power after more than four decades of absolute rule. The Al-Quds march this year also seemed to have the same message, dictators in the Middle East are losing support and are on their way out. Good riddance to all of them. 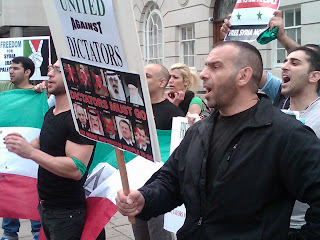 Email ThisBlogThis!Share to TwitterShare to FacebookShare to Pinterest
Labels: alquds 2011

That is very good news! Last year was a horror show, and having seen the videos of your people's bravery in the face of total madness and abuse, I am so glad it has got through to some people! Now it just has to get through to the British and American govs. Hopefully Ahmadi will go with Assad.

Good work on going out and talking to these people.

I can't help but find it curious that you only talk about leftists who were killed by the current regime after the revolution. Didn't the Pahlavis, in whose defence you go to extortionate lengths indulge in the same thing too?

A bit of consistency goes along way in these things.

Great post Potkin - wasn't it interesting? I made it to Trafalqar Square just before the rally and talked to a few people on the march as they came in - few being the operative word. I must have found the only Palestinian - least he said he was Palestinian. He also said he knew nothing of the Iran connection - I was inclined to believe him actually - I dont think he was bullshitting. We talked at length and he listened intently and went away saying he wanted to take it up the 'brothers' on the march. Dont know if he will or, if he did, whether or not he got any kind of result but the thought was well and truly planted.
March struck me as the British Islamist rump of the Palestine support movements. Looked to me like they'd been bussed in the from the mosques. I almost wondered if they weren't perhaps encouraged with a little sweetener to help them on the way... Anyway, it certainly was encouragingly small.

@Claudia: I think you hit the nail on the head.
a) There are hardly any Palestinians on this march
b) most people who take part in this march dont know the IRI connection. See my Facebook for more pictures

Well done for taking a stand Potkin and at least setting a few people straight. The ignornace of some people - be it by blind innocence - is astounding. Yes by all means protest against the ills of Israeli policy, but not by falling into the camp of thugs, gangsters, Nasrallah's saboteurs of democracy nor Khamanei's theocratic tyranny who just exploit it for their own personal greed and power base. However, that power base of pure gun-running negativity, bigotry and hatred is at last hopefully being eroded... Those who financially Assad, belong in the Haugue just as much as he does! And for those who condemn you for addressing the Syian issue Potkin totally miss the point. A) All murderous dictators deserve to go. And B) Without Assad, Iran's regime will be further undermined to increase the in-fighting and outside pressures.
...Incidentally what was the story of Al-Quds in Iran? Of course whereas Ahmandinejad called upon all Muslims to march, was it the same as last year? Most big marches in Iran being banned, or better still, just simply snubbed?

Well, they didn't bring Iranian flag, and you too, didn't bring your Israeli flags. You also didn't chant your 'no Gaza no Lebanon'. The same tactic I suppose!

I don't mean to insult anyone but there are no terms to describe my disgust of the British and the English in particular. Just like that anonymous whoreson who commented here. We are speaking of a regime (IRI) that gives orders to rape young children with the ease that others drink water with. And the first thing that comes to their minds is to engage in apologetic propaganda by slandering the Shah. Yes dear leftist scumbags we got it, you don't like the Shah, hence every crime of this islamist regime must be compared to the Shah in your ludicrous efforts to play down what is happening in Iran. When the Shah enacted laws to give women equal rights nobody on the left and the european secularity gave a shit. The left and european decadent fools have but one enemy, which is a patriotic autocrat, no crime a muslim commits, no matter how unspeakable, qualifies as remotely as bad as constructive policies enacted by the Shah whatever it may be.
The UK deserves the creeping islamisation of its society, suck on it idiots.