Son of Assassinated Doctor Speaks Out 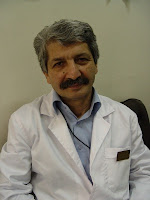 Western press have been keen on covering the assassination of Iranian physicists, publishing the trickle of information that have been released to them by Iran's regime. As I have said in a previous post, the story that these Iranian physicists have something to do with Iran's nuclear project and have therefore been assassinated by Israeli Mossad agents, seems to suit all involved.

One of these medical doctors who was assassinated 11 months ago, was Dr. Abdulreza Soudbakhsh. He was also a Tehran university lecturer and the head of the Infections Unit at Imam Khomeini hospital.

Today, 11 months since Dr. Soudbakhsh was murdered, his son, Behrang spoke out. Many of Dr.Soudbakhsh's patients were victims of Kahrizak detention centre, where unspeakable crimes, including rape, were carried out against some of those who had been detained in the post-election protests. Behrang told an Iranian news website that the authorities had asked his father to say his patients were killed as a result of a meningitis outbreak and if he did not comply he would be eliminated.

Eleven months after Dr. Soudbakhsh was murdered, his son says the authorities have shown no interest in identifying the killers. Behrang also described how the two assassin motorcyclists were roaming around on their bikes for half an hour without even wearing a crash helmet, outside his father's clinic. An unidentified taxi had closed the road access for 10 minutes and the authorities have made no effort to identify the taxi, only saying the CCTV cameras were not working in the area for the duration of the assassination. A pharmacy opposite did have CCTV cameras and the authorities took the films away without ever mentioning the tapes again. The assassins were also using silencers, the mere possession of which carries a heavy jail sentence in Iran.

The authorities at the time also denied any connection between Dr. Soudbakhsh and the Kahrizak patients, but Behrang says all the files are available and prove this was the case. He also told the Iranian news site, how his father was extremely perturbed and talked about the many Kahrizak victims, who were his patients. Behrang recalls his father saying "how can they be so callous? to have raped an 18 year old boy to the extent that he was killed after the rape ordeal"

Behrang also added that his father was due to travel outside Iran, three days after he was assassinated, and the authorities may have feared that he would have spilled the beans about Kahrizak more freely to the media.
Posted by Azarmehr at 3:13 PM

Of course the fact the Basiji always use motor-bikes is a tenuous link. But the fact they also ride about with impunity doing what they like with even hard evidence disappearing should raise some questions? ..Well they would do in a proper uncorrupted rule of law country of course!