Forgive us for We Have Misled You 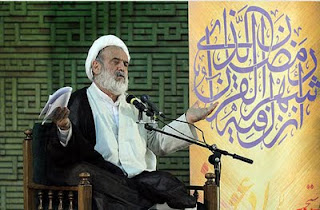 Hojat-ol-Islam Sheikh Hossein Ansarian is an expert orator. In fact most Shiite clerics are, unlike most Iranian opposition figures who have not had much training or opportunity in public speaking, it is part of a Shiite cleric's training how to keep the people's attention when they speak to them from the pulpits. Hossein Ansarian can be regarded as one of the best amongst Iran's Shiite clerics in public speaking for the masses.
His highly charged sermons during the three special nights, 19th to 21St of Ramadan, in Shiite  calendar from the night Imam Ali was struck by the sword until he died of the injuries three days later, are amongst the busiest sermons throughout the year. Ansarian's sermons are often broadcast from state TV as they were this year.

This year there was a twist to his speech however, Ansarian publicly apologised to the people of Iran for having misled them with slogans and promises that were never delivered.

"We who made up slogans, went on the pulpits and gave statements, we who sent you to the front lines to carry out the revolution, we did not seek power or position and we do not seek it now, but we did not want this present situation either. This was not the revolution we wanted"

As he placed the holy Koran on his head, part of the ceremonies on these nights, he continued saying emotionally: "People, please forgive us, we made promises to you which did not materialise, we didn't want you to be in this dire economic situation, we didn't want to see these soaring prices, the revolution was hijacked by the wrongdoers'

Ansarian's apology which lasted for three minutes ended by telling people, "have no expectation from anyone other than the Hidden Imam who will one day come out of occultation and liberate the world."
Posted by Azarmehr at 12:29 AM

So what's this mean then? A grudging admission that the mafiaso Mullah state has totally failed the people?
Far from some hidden Iman, the murderous medieval regime now know that the writing's on the wall for them!
With each fall of a dictator within the region, the more the magnifying glass scorches their tainted robes!
That's why now of course they're jostling with the cynical and cowardly overtures that say - 'Hey I was on the side of the people all along?'
Yeah right..!
When the ticking time bomb of public fury finally does explode however, neither the Khanmanei nor the Ahmandinejad camp should think themself safe by blaming and scapegoating each other.
They are both equally condemned in the eyes of the people's ultimate retribution!

"The mirror crack'd from side to side..."