4th Day Outside the British Museum 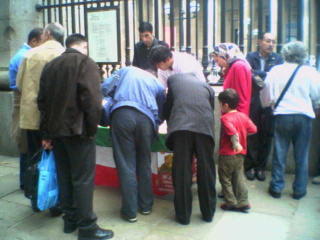 Another fantastic day outside the British Museum, collecting signatures against the building of the Sivand dam. Today we managed to man the petition desk almost for the full day.

Ironically shortly after the Iraqi family, there was an Afghan family who signed the petition. No need to remind you of how familiar they were with the destruction of their national heritage at the hands of zealots.

There was also another young couple on bicycles. They had been to Pasargard only three months ago, cycling across Iran for two months and in that short time they were so fluent in Persian that they conversed with us in Persian.

I rang up a reporter from radio Farda and after some wrangling, I convinced her that our action was worth some news coverage. In response to one of her questions, I mentioned how we have collected signatures from so many different nationalities. Yet I forgot to tell her the different mix of the people we had manning the petition desk today.

We had Kurdish, Azeri, Arab speaking Iranian, Lor, Gilaki and youngsters who were born outside Iran helping the petition desk today.
Those who desperately conspire against the national integrity and unity of Iran should learn a lesson from this. The bond between different people of Iran is too deep rooted and too strong for anyone to attempt to break it. We are fingers of a clenched fist and the arm which holds us is 100% Iranian. 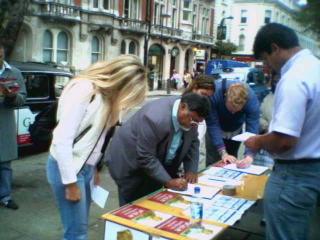