600 Signatures to Stop the Sivand Dam Outside British Museum 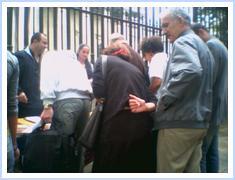 British Museum started the Ancient Iran exhibition from yesterday. Today we managed to set up a desk outside the Museum's main gate and in just under three hours collected more than 600 signatures, calling for a stop to the building of Sivand dam which threatens to flood more than 100 archaeological sites including Cyrus' tomb in Pasargard.

Our desk was ornated all around with laminated posters of Cyrus' tomb in Pasargard, with the words of his epitaph "Grudge me not this humble monument"

A leaflet which included the article in the UK daily, The Guardian, about the building of the dam and the dangers it imposes was also handed out to the passers by and those who visited the British Museum. 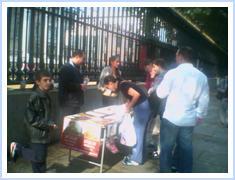 The response from the crowd, from all different nationalities, was overwhelming. Despite the frequent showers, at times people queued up to sign the petition.

British Museum has so far declined to give us permission to hold the petition inside the museum's grounds for fears of upsetting the Islamic Republic authorities.

However, the ancient Iran exhibition has provided us with an excellent opportunity to raise awareness about the dangers of building the Sivand dam. Those of us who took part in collecting the signatures felt good that we did something to save our forefather's place of rest.

We will also be there again tomorrow. Come and help us to man the petition desk through the entire duration of the exhibition.

I welcome any comments on my weblog, good or bad, but I must respond to the above comment. The author of the above comment seems to suffer from an acute case of what is known in Iran as the "Uncle Napoleon" syndrome. It referes to a mentality that Britain is behind everything and nothing done by the Bitish and by Britain is good for us.

Today I had the opportunity to visit the exhibition and I very much enjoyed it. At times watching parts of the Persepolis reconstruction DVD, I nearly overcame with my emotions. I recommend visiting the exhibition to everyone. I think the entire exhibition was extremely well presented.

Anonymous said...
This comment has been removed by a blog administrator.
3:05 AM


I wish i could do something.What do you suggest to be influencial?

see Saturday's update on my blog for a few suggestions as to how you can help us.

Why do you have a deleted post?
Is this the kind of democracy you have in mind???

Yes this is exactly the kind of democracy I have in mind.
Comments which advertise urls for other non-related websites such as adult material will be deleted. If you don't agree with that, then tough!