Anniversary of a National Epic 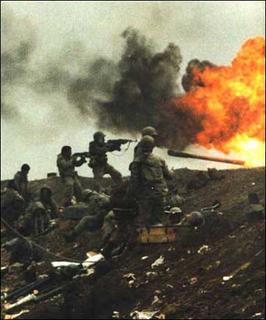 The word "Epic" is not enough to describe the heroic resistance of Iranians against Saddam's aggression against our country.

Saddam Hossein once said, "Allah only made two mistakes during creation, harmful insects and Persians"

Invasion of our country was attempted many times by Saddam before the revolution, but on every occasion, the might of Iranian army had repelled his forces and put him in his place

I remember as a child when I saw the headline on the front page of a newspaper, and the anxiety I felt when I read "41 Iranian Soldiers Martyred in the Border Battle"
But no sooner than the next day, Iranian military had pushed back Saddam's forces where they belonged, i.e. on the other side of the Arvand river.

Iran's armed forces however were crippled after the Islamic revolution. Many of Iran's generals were executed straight after the revolution and many of its finest officers and airmen were executed after the uprising in Shahrokhi air base, shortly before the all out Iraqi invasion.

Saddam must have thought there is no better time to invade Iran than now. He compared his initial successes with that of the Ghadessieh battle, 1400 years earlier, when the Arabs invaded Iran to destroy our civilization.
Just as in the days of the Ghadessieh, when the Arabs looted and destroyed; Saddam's henchmen also looted and destroyed. Khorramshahr was treated by the new invaders the same as Ctesiphon was. In those days, the invading Arabs had no concept of a number beyond 1000. To them one thousand was the highest number possible. They did not know what to do and how to divide a booty with more than 1000 gold coins. The huge Baharestan carpet, with its silk and gold threads was cut into small fragments and divided amongst the victorious savages. The new invaders showed no less savagery than their predecessors. Khorramshahr was flattened, women and children were not spared.

Yet Saddam's rantings of "Second Ghadessieh" became his nightmare. Iranians fought back with tooth and nails against his superior military power to regain the Iranian soil, inch by inch. Iranians were poorly trained, badly equipped, incompetently led, but fought like lions.

The war should have been stopped when all Iranian soil was regained. At the time, with the help of Gulf sheikhdoms, Saddam was offering a huge compensation for his invasion of Iran, yet the mullahs wanted to continue the war and turn Iraq into the next Islamic Republic. Thousands more died unnecessarily while some lined their pockets, until Iran's tanks were running out of petrol in the battlefields and Saddam's use of chemical weapons overwhelmed our troops. Suddenly Khomeini had to drink his famous "hemlock goblet" and signed the peace treaty with no tangible gains for either side.

Today many of our war veteran heroes are living a life of misery, bad health and poverty. When I hear a war veteran having to sell his kidney to pay his debts, I feel the same as I did when Saddam bombed Mehrabad airport.
On the anniversary of the Iraqi invasion, this week, let us pay tribute to the courage and sacrifice of those who laid their lives to defend the motherland, and let us not forget the veterans who survived and need our help now. 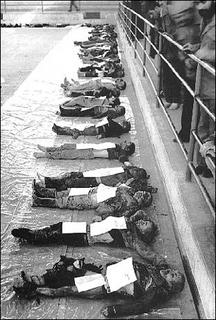 Iranian children victims of Iraqi missile on a primary school in Dezful.

Hi, I was jjust passing by! If you have time, go see my internet marketing advertising related site. It's nothing special but you might still find something interesting.

Keep up the good work!!