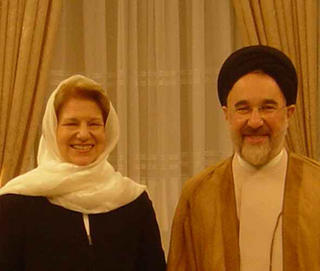 Barones Emma Nicholson who is Vice President of the EP Committee on Foreign Affairs and member of delegation for relations with Iran, speaking today during a debate on Iran in the EP in Brussels, said Iran "has a more advanced form of democracy than most of her neighbours." and "the Islamic Republic of Iran has much to offer the region and the wider world"!!

Islamic Republic is infact a brutal backward theocracy. Only Shiite Muslims can stand as candidates in the "elections", but not all the Shiites, only the ones who accept the state interpretation of Shiite Islam, even then they are still vetted by the unelected Guardian Council before the elections and after the elections, even then the state uses its apparatus to cheat in the elections.

To draw an analogy, it would be elections in Apartheid run South Africa, where only a minority could have taken part in the election process according to their racial status. Yet all this does not stop a vile British Baroness from promoting the Islamic Republic as a "shining example of democracy in the region". Imagine if she had mentioned the Apartheid South Africa as a "shining example of democracy in the region", there would have been an uproar among the luvvies and the arti-farties, but Baroness Nicholson can get away with saying it about the Islamic Republic of Iran, where women are not allowed to stand for many posts. Why can Nicholson get away with such comments??????. Because we Iranian expats let her and her kind get away with it. We are too busy wasting time, talking amongst ourselves and condemning Islamic Republic on PalTalk and making speeches for ourselves in our so many conferences.

I happen to know a few things about this scum Baroness, apart from the fact that she has extremely bad breath, in a meeting in Laleh hotel in Tehran and in the presence of some Islamic Intelligence Officials, she asked a BBC reporter to spy on an Iranian dissident under the disguise of making a documentary. The BBC reporter has privately confirmed this information to me, but sadly does not have enough courage to go public with it.

If you are a cyber-activist and all you can do is send emails then here is her email: enicholson@europarl.eu.int

If you want to do more to shut up Baroness Nicholson and other politicians like her then contact me, I have some good ideas onhow to shut her and her kind up for good.

For god sake, don't be so simple minded. You are an embarrasment to the Iranian opposition. People like you with such simple arguements strengthen the mullahs.

There you go, proof that I allow anyone to say anything on this blog provided its relevant.

I wonder who this Reza is?

Also, I may in your opinion be an embarassment to the Iranian opposition for opposing Nicholson, but I get quoted by British columnists:
http://www.melaniephillips.com/diary/archives/001501.html

If you had guts, you would at least say who you are and why you are such a source of pride to the Iranian opposition.

Being quote by Melanie Phillips