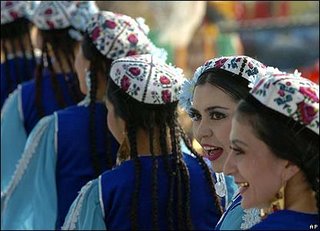 What is the least common denominator of people who have a connection to the Iranian culture? Its not speaking Persian, its not facial features, colour of skin, hair or eyes, its not religion, and its not border boundaries. Its celebrating Nowrooz.

Imagine the Kurds, the Azeris, the Persians, the Uzbecks, the Aranis, the Tajiks, the Afghans, the Ossetians, the Armenians, the Iranian Arabs, the Turkomans, ....as a circle each. Where these circles all overlap is a segment called Nowrooz.


Yesterday I hopped through the satellite channels. It was so pleasing to watch news of Nowrooz celebrations across the countries. The Aranis, the Kurds, the Uzbecks, the Tajiks, all reporting the joyful Nowrooz celebrations of their people on their TV stations. There was of course one exception, Islamic Republic of Iran!!!

The Iranian TV showed no signs of celebrations or joyfulness. Yesterday coincided with the 40th day of mourning after the murder of prophet Mohammad's grandson, Hossein, by his Arab relatives 1400 years ago in the Arab lunar calendar. So while all the joyful Nowrooz celebrations were going on everywhere around the Iranian borders, the Iranian people were subjected to a depressing day of mourning broadcasts. What an irony, the very heart of the Iranian culture, where the biggest celebrations of Nowrooz should take place, was made silent! 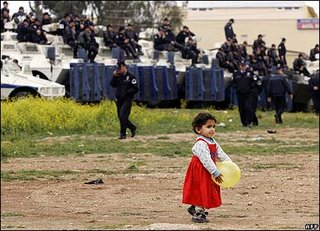 [Armed Turkish police watch nervously as a Kurdish child tries to enjoy Nowrooz]
Posted by Azarmehr at 3:36 AM

azarmehr, what is your love with terrorist kurds? is pkk not killing people in iran ?
actually nevruz is not celebrated in turkey. kurd terrorists use nevruz for politic. they cannot enoy the day but fight the police , damage cars and trees and flowers.the terrorist kurds are such ignorant people. and know that pkk backed terrorist party DTP got only 5 percent vote and doesnt cover all the kurds.

According to Ayhan, the small child playing with the baloon is a terrorist!

This guy who accuses everone of being a Chauvinist and claims how oppressed the Turks in Iran are, proudly says Nowrooz is not celebrated in Turkey. Its not celebrated because you Chauvinist Turks won't recognise a minority in your land.