TEHRAN (Reuters) - Islamic dress codes should not be imposed by confrontation, Iran's president said on Sunday as police said they would be taking a softer approach during a summer campaign against "social corruption". Presumably this means that unlike the early days of the revolution, women will not be forced to wipe their make up with handkerchiefs which concealed razor blades. Yipee!! Iranian women should be so grateful!

On the other hand again according to Reuters, "Police said they would crackdown from Saturday on women ignoring the dress code, which requires them to cover their hair and wear long, loose-fitting clothes to cloak their bodies. Offenders can be punished by fines, lashes or imprisonment. "

Meanwhile, below are some pictures of the "softly approach" by the Islamic Republic police and the militia women telling the Iranian women how they should dress: 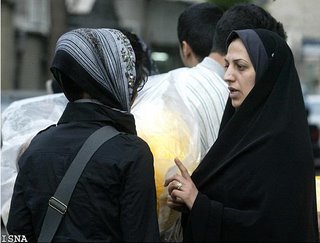 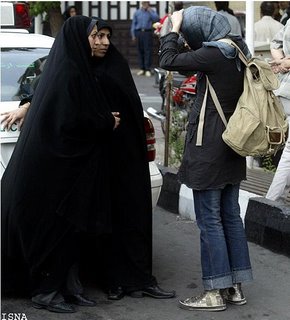 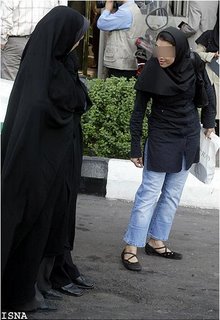 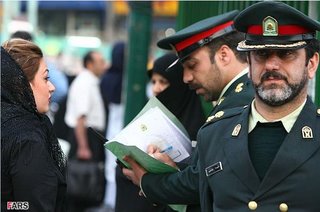 Western feminists only protest when pretty women get somewhere (envy). Clearly this is a feministic issue, but they never stick up for their Iranian counterparts. Why? because it is a battle between the ugly chador clad against the beautiful women.

I don't understand your comment, but this is not just a feminist issue. First, things are better in that the Pasdar does not roam the street with machine guns, women are not imprisoned for letting some hair escape, and young girls are not put into sacks of cockroaches because they did not wear nylons under pants under chador. However, the point of this blog is very clearly to show us that we are not to think that Iran has yet become good enough. The main difference, that I see, is that there are Iranian women (yes, pretty ones) who are walking about Teheran in jeans and sandals.
Should every woman "stick up" for every other? What makes the "sisterhood of woman" so much more realistic than the "brotherhood of man"? What exactly would you expect women to do?