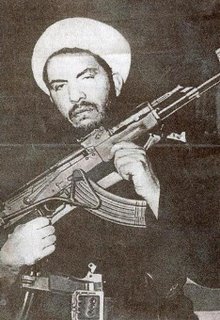 The figure you see here is that of Mollah Hassani, the Friday prayer leader of Oroumieh, North West Iran. A frightening character, straight out of the dark ages. If one day his memoirs are translated, two things may shock a Westerner. Firstly that he calmly talks about the murder of his son, who was an activist within the Iranian Marxist Fedayeen organisation. In the brutal crackdown of the 80s on Iran's Left, his son's hideout became known to Molla Hassani. He writes with pride how he let the authorities know about this; which subsequently led to his son's arrest and execution. He even justifies his action by using Noah's sons as an example, where a "pious" man's children do not turn out to be like their "pious" father.
Hassani's daughter also committed suicide, and he refused to go to her funeral because suicide is forbidden in Islam.

However this should not shock you if you know Iran's mullahs. Hassani is not the only Iranian cleric who has killed his own kin. Ayatollah Gilani, for example, is another one who executed two of his sons for being activists against the Islamic state.

Next thing that may shock a Westerner from reading Hassani's memoirs, is how the UK Home Office readily granted him a visa to visit the UK, attend mosques in London, make speeches and poison young Muslim British minds. However this should not shock a Westerner either. Those of us who have dealt with asylum applications in UK, know how frustrating it is to see many decent genuine applications who are in real fear of their life and freedom being turned down for no good reason. Yet we see so many thugs and bogus applications succeed. The asylum application as a lawyer friend of mine once said "is a lottery".

I have written about this many times, but this week, the huge blunder of releasing more than 1000 illegal immigrant convicts, murderers, rapists, drug dealers ..., and then losing all trace of them by the UK Home Office, finally made the headlines in the British press. More cases became newsworthy too. For example a scam by Mohammad Faruq, the ringleader of an immigration scam that cost the British tax payer more than £600,000. Mohammad Faruq brought his relatives over who then changed their names and applied for asylum. Faruq who owns 60 houses; would provide emergency accommodation, costing up to £235 a night, and then claimed the rent back from social services.

Yet the British Home Office becomes so adamant when it comes to deporting a decent educated, Iranian family like the Farivars, whose 13 year old daughter is suicidal in fear of returning to Iran and being forced to marry a 43 year old man.

Some Iranian ex-pats, with limited means, are attempting to collect 1000 signatures, one per each convict released without a trace by the Home Office. Many Iranian ex-pats who go back and forward to Iran are scared of even signing the petition however.

The petition is in appreciation of Clare Short MP, who stood up for the Farivars in the UK parliament and highlighted the case of under age marriage state laws in Iran:

He can be the true nature of the regime!