British Police Try to Arrest the Plaintiff Against Khatami 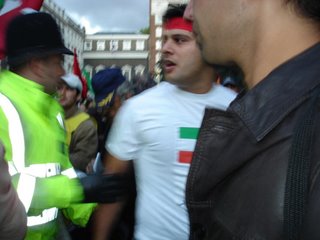 British police today tried to arrest Safa Einollahi as soon as he arrived to join other protesters against Khatami outside Chatham House, but other protesters fought with the police and prevented them from taking Safa away.

Safa is one of the two Iranian refugees who had applied to the Met Police to have Khatami arrested under Section 134 of the Criminal Justice Act 1998. This Act requires the arrest of any individual, regardless of nationality, where there is evidence that they committed, condoned or colluded with acts of torture. The legislation has a universal jurisdiction, and therefore covers torture committed by Iranians against Iranians in Iran. Section 134, which incorporates the UN Convention Against Torture 1984 into UK law, also holds high state officials responsible if they fail to stop torture.

Safa was arrested and detained in 1999 during the student protests in Iran. During his arrest, Safa was raped by bottle on two occasions. As a result of such inhumane acts, Safa suffers from long term physical and pscychological injuries.

In a more sinister move, the Metroplitan police also entered Safa's house last night and interrogated him. Asking him questions like "What other friends do you have in Britain who were previously detained in Iran."

Sue Wilkinson from the Metropolitan Police, yesterday replied to the application made by Sabi & Associates lawyers who were acting on behalf of the two Iranian refugees and refused to issue an arrest warrant saying there was insufficient evidence that Khatami personally committed such acts of torture or ordered them to be conducted.

Khatami has not attempted any dialogue with the two refugees who suffered such horrific treatments during his presidency, while on his UK tour.

sometimes I am stunned with things Eurowhinnies do and this is one of them. Shame on these europeans who have no shame at all

But the Met police dont hesitate to shoot an innocent Brazilian, and then get rid of the evidence. Here is evidence that Khatami knew about the human rights abuses that took place during his presidency. From his speech at Chatham House yesterday, reported by Phil Hazlewood of AFP:

"On his own alleged involvement, he said that where abuses took place "sometimes I was not in a position to do anything about it".

So he obviously knew about them. The point is how could the president of a country not be able to do anything about all this and also to remain silent. And if he was that powerless when he was a president then why talk to him now???

The Iranian people have always thought the British are behind the mullahs. This silly act by the UK police will further reinforce this theory. Remember they also arrested and shot another Iranian opposition figure in a dawn raid without any evidence against him at all, on the eve of the presidential Selection in Iran. Dont tell me there wasnt a deal going on.

LONDON [MENL] -- The British government has acknowledged arms sales to Iran and Syria.

A British Foreign Office report said the government has granted licenses for dual-use equipment to Iran and Syria. The report said the exports include components and technology that could be used by the militaries of the two Middle East states.

The Foreign Office said Syria has ordered nearly $200,000 worth of dual-use items from Britain, including chemicals as well as technology to produce toxins. The purchases were said to have taken place between October and December 2005.

Since May, the Home Office has been asked, under the terms of the Freedom of Information Act, on five occasions whether it has or planning operational understandings with Iran on the return of Iranian asylum seekers and refugees and suppling information to Iran. The Home Office has declined, claiming that it was not in the public interest and would damage Britain's international standing. It is clear to me that the British and Iranian authorities have a secret policy on the treatment of Iranian dissidents in the UK.

"In November 1978, President Carter named the Bilderberg group's George Ball, another member of the Trilateral Commission, to head a special White House Iran task force under the National Security Council's Brzezinski. Ball recommended that Washington drop support for the Shah of Iran and support the fundamentalistic Islamic opposition of Ayatollah Khomeini. Robert Bowie from the CIA was one of the lead 'case officers' in the new CIA-led coup against the man their covert actions had placed into power 25 years earlier.

Their scheme was based on a detailed study of the phenomenon of Islamic fundamentalism, as presented by British Islamic expert, Dr. Bernard Lewis, then on assignment at Princeton University in the United States. Lewis's scheme, which was unveiled at the May 1979 Bilderberg meeting in Austria, endorsed the radical Muslim Brotherhood movement behind Khomeini, in order to promote balkanization of the entire Muslim Near East along tribal and religious lines. Lewis argued that the West should encourage autonomous groups such as the Kurds, Armenians, Lebanese Maronites, Ethiopian Copts, Azerbaijani Turks, and so forth. The chaos would spread in what he termed an 'Arc of Crisis,' which would spill over into Muslim regions of the Soviet Union.


The coup against the Shah, like that against Mossadegh in 1953, was run by British and American intelligence, with the bombastic American, Brzezinski, taking public 'credit' for getting rid of the 'corrupt' Shah, while the British characteristically remained safely in the background.

During 1978, negotiations were under way between the Shah's government and British Petroleum for renewal of the 25-year old extraction agreement. By October 1978, the talks had collapsed over a British 'offer' which demanded exclusive rights to Iran's future oil output, while refusing to guarantee purchase of the oil. With their dependence on British-controlled export apparently at an end, Iran appeared on the verge of independence in its oil sales policy for the first time since 1953, with eager prospective buyers in Germany, France, Japan and elsewhere. In its lead editorial that September, Iran's Kayhan International stated:

In retrospect, the 25-year partnership with the [British Petroleum] consortium and the 50-year relationship with British Petroleum which preceded it, have not been satisfactory ones for Iran â€¦ Looking to the future, NIOC [National Iranian Oil Company] should plan to handle all operations by itself.

London was blackmailing and putting enormous economic pressure on the Shah's regime by refusing to buy Iranian oil production, taking only 3 million or so barrels daily of an agreed minimum of 5 million barrels per day. This imposed dramatic revenue pressures on Iran, which provided the context in which religious discontent against the Shah could be fanned by trained agitators deployed by British and U.S. intelligence. In addition, strikes among oil workers at this critical juncture crippled Iranian oil production.

As Iran's domestic economic troubles grew, American 'security' advisers to the Shah's Savak secret police implemented a policy of ever more brutal repression, in a manner calculated to maximize popular antipathy to the Shah. At the same time, the Carter administration cynically began protesting abuses of 'human rights' under the Shah.

British Petroleum reportedly began to organize capital flight out of Iran, through its strong influence in Iran's financial and banking community. The British Broadcasting Corporation's Persian-language broadcasts, with dozens of Persian-speaking BBC 'correspondents' sent into even the smallest village, drummed up hysteria against the Shah. The BBC gave Ayatollah Khomeini a full propaganda platform inside Iran during this time. The British government-owned broadcasting organization refused to give the Shah's government an equal chance to reply. Repeated personal appeals from the Shah to the BBC yielded no result. Anglo-American intelligence was committed to toppling the Shah. The Shah fled in January, and by February 1979, Khomeini had been flown into Tehran to proclaim the establishment of his repressive theocratic state to replace the Shah's government.


Reflecting on his downfall months later, shortly before his death, the Shah noted from exile,

I did not know it then â€“ perhaps I did not want to know â€“ but it is clear to me now that the Americans wanted me out. Clearly this is what the human rights advocates in the State Department wanted â€¦ What was I to make of the Administration's sudden decision to call former Under Secretary of State George Ball to the White House as an adviser on Iran? â€¦ Ball was among those Americans who wanted to abandon me and ultimately my country.[1][1]

With the fall of the Shah and the coming to power of the fanatical Khomeini adherents in Iran, chaos was unleashed. By May 1979, the new Khomeini regime had singled out the country's nuclear power development plans and announced cancellation of the entire program for French and German nuclear reactor construction.

Carter's security adviser, Zbigniew Brzezinski, and secretary of state, Cyrus Vance, implemented their 'Arc of Crisis' policy, spreading the instability of the Iranian revolution throughout the perimeter around the Soviet Union. Throughout the Islamic perimeter from Pakistan to Iran, U.S. initiatives created instability or worse."

[1][1] In 1978, the Iranian Ettelaat published an article accusing Khomeini of being a British agent. The clerics organized violent demonstrations in response, which led to the flight of the Shah months later. See U.S. Library of Congress Country Studies, Iran. The Coming of the Revolution. December 1987. The role of BBC Persian broadcasts in the ousting of the Shah is detailed in Hossein Shahidi. 'BBC Persian Service 60 years on.' The Iranian. September 24, 2001. The BBC was so much identified with Khomeini that it won the name 'Ayatollah BBC.'

Ian Blair is a total prick. He should have been forced to resign ages ago.