The campus security threatened to forcefully remove the three students and this resulted in a spontaneous human chain by other students to protect the three. Campus marshals tried to break up the gathering by physically attacking the 200 students who had formed the human chain. One injured student was taken to hospital. 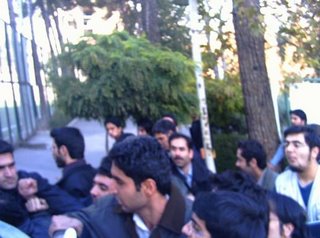 This happened in the UK? That bastion of free speech? How? What in the world is happening?

Thank you for keeping us up to date on the news. You have a great week.

A disgrace! I am a mature student studying ME politics (postgrad) at university here in the UK and it shames me that this kind of activity isn't more widely reported.

Keep up the good work, I really enjoy your blog, and hopefully one day we will see a democratic Iran (Persia)

How many more new generations of Persians are to be destroyed by the hands of this evil mafia before we rise up and say ENOUGH IS ENOUGH.
They have closed down the universities, they have killed the innocent students inside and outside the university. They have decimated the teaching profession and destroyed the Persian culture and Persia's proud self esteem.
Those who in the early years of this evil system help them in these bloody deeds by instigating and collaborating with them are as much guilty in this crime as those whose hands are red with this stain.
Those of the last generations, be it the so called revolutionary who started this mess and brought about this mayhem and the later ones who by working in this system and filling their pockets with the proceeds of this tainted existence are now the very people who are being attacked by this evil system.
The so called reformist are now in the same shit as much as we have all been in the last 28 years.
The collaborators of the last 28 years have to reflect on their deeds and weep for their children being killed one by one in the universities by the Basijes or by the hidden hands of drugs and prostitution's created AIDS.
Who will save this nation from the hands of lairs and criminals?
Who will change the tide?