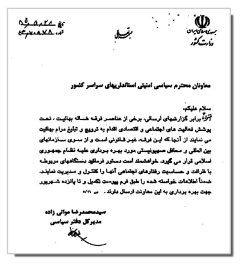 While Khatami dazzled and wooed some of the British academics, think tanks, diplomats and journalists with his lovely words about inter faith dialogue, Iran's Ministry of Interior has ordered officials throughout the country to step up the surveillance of Iranian Baha'is focusing in particular on their community activities.

The Ministry has requested provincial officials to complete a detailed questionnaire about the circumstances and activities of local Baha'is, including their "financial status," "social interactions," and "association with foreign assemblies," among other things.

Over the last two years, at least 129 Baha'is have been arrested, released on bail, and are now awaiting trial throughout the country. The bail demands have been high, in most cases requiring the Baha'is to hand over considerable sums of money, deeds to property, business or work licenses.

See translation of the document.

In the Name of God

Respectfully, we have received reports that some of the elements of the perverse sect of Bahaism are attempting to teach and spread the ideology of Bahaism, under the cover of social and economic activities. In view of the fact that this sect is illegal and that it is exploited by international and Zionist organizations against the government of the Islamic Republic of Iran, we therefore ask you to order the relevant offices to cautiously and carefully monitor and manage their [the Bahá’ís’] social activities. In addition, complete the requested information on the enclosed form and forward it to this office for its use by 15 Shahrívar [6 September 2006].

Azarmehr, you can wake a man who is sleeping but you can't wake someone who is pretending to sleep. Those British who supported Khatami know all this but will never want to wake up, they have other interests at heart.

Iran is home to 350,000 members of the Baha'i religion. All of these people are denied legal equality by reason of their beliefs. In 1998 a 52 year old man, Ruh'ullah Rohani, a Baha'i, was executed for the crime of apostasy. He did not have access to lawyer and was given oral notice of his death sentence 24 hours before being hung. 6 other Baha'is were on death row that year, but an international outcry saved them from the same fate. A Christian pastor, Hamid Pourmand, was also sentenced to death for apostasy during Khatami's period of office, and only saved by similar pressure. That is the kind of interfaith tolerance that existed in Iran under Khatami, that is the reality.

The annual reports of the US Commission on International Religious Freedom, the FCO Annual Human Rights report, human rights NGO reports and UN resolutions throughout the years 1997 to 2005 all record serious problems of religious tolerance in Iran for Baha'is, and some problems for Jews, Christians and Zoroastrians, as well as for Sufi and Sunni Muslims.

There is ample evidence that St Andrews University and Sir Menzies Campbell could locate with ease that prove conclusively that whatever honeyed words were coming from the Iranian Presidency on interfaith relations OUTSIDE of Iran, for religious minorities INSIDE Iran, there was a lack of equality, repression and frequent human rights abuses.

And inform me whether you'd like to be signatory to it or not.

If you could pass it on to others as well i would really appreciate it.

dear potkin, unfortunately some reporters as behnood try to change ideas and opinions about khatami who is the other murder in mind.he and khatami as ahmadinejad tell the several story concerning phalestinian and muslims instead of iranian people.a shameless liar!
and you can see the shameful article as i said in his blog and give me your idea about him if it's possible.thanks
www.behnoodonline.net

Just as the United States maintains
a constructive relationship with China (and earlier did
so with the Soviet Union) while strongly opposing certain
aspects of its internal and international policies,Washington
should approach Iran with a readiness to explore areas of
common interests, while continuing to contest objectionable
policies.

China and Soviet Union wanted a relationship with the US. China at the time saw the Soviet Union as her biggest threat, and wanted US as an ally. The Islamic Republic on the other hand does not want engagement with the US. IRI instead wants leadership of the Islamic world, and being the enemey of the US serves that purpose.

Also the European Union has never disengaged from negotiations with the mullahs, what they call "critical dialogue", yet IRI is still a religious apartheid and a repressive regime, just more sophisticated.

Iran’s isolation only impedes its
people’s ongoing struggle for a more democratic government
and strengthens the hand of hard-liners who preach confrontation
with the rest of the world. Integrating Iran into the
international community through formal institutional obligations
as well as expanded people-to-people contacts.