At the Cannes film festival, a tearful Juliette Binoche, carried a large sign with Jafar Panahi's name on it and said 'I hope he will be here next year'. Time and time again it has been proven that persistent pressure and high profile campaigning does work.

I wish Western academics and universities would also learn from their film industry colleagues. One would have thought with all the Iranian students currently imprisoned, tortured and killed, the UK students and academics would also campaign for their colleagues. Yet sadly the evidence suggests otherwise, even at universities like SOAS, UCL and Durham where graduates of these universities are currently serving long term prison sentences, not only there isn't much appetite for campaigning, representatives of Ahmadinejad's junta administration continue to hold regular 'cultural' events and dinner parties. One wonders at the moral decline of UK academics, which sadly includes many Iranian lecturers, where a free lunch seems to be more preferable for them than standing up for basic human values.

Video of Bahareh Hedayat, Iranian student appealing for solidarity from Western universities before she received a 9 and 1/2 year sentence:

Picture of SOAS lecturer Anna Contadini, rushing to receive her award from Ahmadinejad : 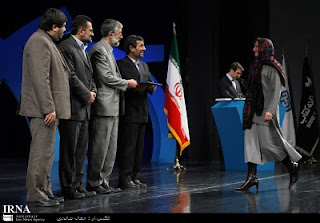 Yes, International pressure may well work, but the morally bankrupt Judicary of this junta also once again profiteers! As it's long been established - those who can pay get released from their trumpted up charges. Those who can't can unfortunately face the gallows! But I agree... My own country of Britain could do a hellava lot more to speak out against this tyranny rather than accommodate or worst still - entertain it! Maybe then a lot more unnamed innocents who can't pay, might be released as well! Let's not forget them.

Normally academic staff e-mails are published on the university websites. We should be writing to as many of these as we can and tell them about what is really happening in Iran.

Neda - That has been tried and must be persevered. However, do not be surprised if you receive a lack of co-operation by the staff, or worse still, threat of police presence if you persist on contacting 'academic' staff to simply politely question them on their gross misconduct, such as Anna Contadini's desperate award from Ahmadinejad...

Mehrtash, I don't think Neda's point was to use Western university websites necessarily to attack faculty at the particular university, but to inform people about what is happening in Iran, particularly, I would think, what is happening to teachers and students, such as Majid Tavakoli, the jailed student leader who is on hunger strike.

I imagine there are student discussion lists at various schools that Iranian Diaspora students could post on more as well. The media is not reporting this stuff!

I have sent e-mails to various university academic staff, letting them know about the plight of students and what is really happening in Iran. And I will continue to do so;
No one has objected so far. If any one's interested to see the letter I send out, let me know and I will post it here.

Neda, please post your letter! Many people may read it and be inspired to do likewise!!

Neda, if you would please post the letter you sent out, I think it would be of interest to many people who do not necessarily write comments.

Calling on the UK Government to stop support for the terrorist regime of the Islamic Republic of Iran:

You may have seen in the news, since June 09 after the sham elections, images of Iranian people being beaten, tear gassed and shot at as they march peacefully in the streets.
Thousands have been arrested and hundreds have been tortured and raped in the Islamic Republic jails. At the moment 95 journalists are spending their days in solitary confinement, along with child executions, assassinations of opposition figures and disappearance of young people, this government is now the number one country for gross abuses of human rights. The brunt of the repression has been born by the Iranian student movement.

Yet the UK Government has been supporting this terrorist regime in return for cheap oil and trading contracts. To help the Islamic Republic achieve its aims, special technology was supplied which enables this terrorist regime to track and arrest those who oppose them. (Hundreds of students have been arrested, beaten and killed just for sending images of police brutality via their mobile phones).

Britain is host to hundreds of Islamic Republic senior government figures who have homes here and are given visas to visit, to shop, have bank accounts with millions of pounds of stolen and misappropriated funds taken from the Iranian people.
There are currently dozens of centres belonging to the Islamic Republic across the UK, in London in particular. Press TV, a propaganda media station owned by the Islamic Republic is allowed to broadcast freely from its base in Hanger Lane, at a time when Iranian journalists are in prison.

The Islamic Republic officials are allowed to hold events, celebrations and gatherings across the UK and British Universities such as UCL and Durham, which have offered free platforms to these terrorists and their representatives in order to legitimise their existence. We call upon the British student movement to act in support and solidarity with the Iranian students who are suffering untold abuse at the hands of this terrorist government, with the full support of the West.

We ask the UK Government to act immediately to:
• Close down Islamic Republic centres in London such as Press TV and Khameneie’s office in Maida Vale
• Freeze the bank accounts of the Islamic Republic personnel and its representatives
• To cease oil and trade contracts which provide revenue for the IR
• Not to issue visas to the IR personnel

Thank you for your support

I did not say anything about 'attacking' academic staff. One has to engage in dialogue with the source before determining whether one should publicly name and shame. I did attempt to speak with Anna Contadini and all I received were evasive lies and threat of police if I pursued the matter. At no point did I endorse hostilities. You will read about it soon enough via MENA press and my blog.