'Expect Ahmadinejad for a Third Term' 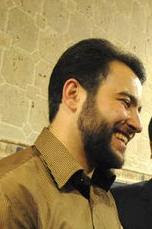 Mohammad-Reza Jalayipour is from a revolutionary family. His father was one of the first recruits in the revolutionary guards after it was formed in the aftermath of the overthrow of the Shah and became the governor of Naghadeh in Iranian Kurdistan. Two of his uncles were martyred in defending Iran against Saddam Hussein's forces, Another one of his uncles was assassinated by the 'counter-revolutionary' groups in the eighties. Mohammad Reza Jalayipour has a degree from Tehran university and a Masters degree from London School of Economics.

During the last presidential elections, Jalayipour was an effective organiser of Moussavi's election campaign. That was enough to vilify him in the eyes of Ahmadinejad's administration despite his revolutionary background. Jalayipour was arrested after the elections in the airport as he tried to board the plane to London, where he planned to continue with his PHD at Oxford university and join his wife. He was released on bail after appearing on the show trials but was arrested again at his father's house yesterday.

'I told them why do you enter my house like this and search everything in this way? Are we thieves and murderers?' His father asked the five heavily built intelligence ministry agents who rummaged through all his belongings including his wife's clothing and underwear.

'They filmed everything in the house except the pictures of my martyred brothers. I asked them why do you not film them? So your puppet masters know what kind of a family you are doing this to. As the five heavily built men left the house, they told me 'Just remember, Ahmadinejad will be the president for a third term' '

The only good Islamist is a dead Islamist. That includes so called "reformists" and anyone associated with the terrorist IRGC.

Arash, excellent argument there chief. I'm sold to your way of thinking.

Well 'Anonymous', we listened to 'reasonable' people like you last year when you told us how important it was to pursue the gradualist and reformist route and instead of having a destructive revolution why not just try and replace one Islamist murderer with another one through the ballot box and peaceful demonstrations. Well, so much for that argument.

I said it last year, I say it now, and I will say it in future: this savage and barbaric system run by a bunch of 'turbaned turds' (to quote Hitchens' delightful phrase) is un-reformable. No compromise with it is possible, and none should ever be sought.

So Arash, I'm afraid, is essentially right. These guys are out to take over the world and the only way to stop them is by declaring war on them. You're not going to talk these guys out of their madness. They've put themselves beyond reason and logic. After all, reason and logic are merely human qualities and these bearded loons answer to a higher authority.

The future's quite bleak my friend. Better get used to it.

A third term! Ha! Pinnochio Ahmandinejad and his puppet master Khamanei will be lucky to live and serve out two! Cornered wounded animals can only lash out for so long before someone decides to shoot them! This diseased regime has proved time and time again that all it offers is further running sores, blight and continued infection. With all of it's torture and dung heap commanders, it positively wallows in it! Khamanei knows... In his fear and chicken plans to run away to Syria, he knows that one day his psychotic brand of sickness will be wiped out by a bloody good dose of the people's medicine!!!

You guys are so off-base it's ridiculous. "the only good-Islamist is a dead Islamist."

Arash, do you even know how this phrase originated?

"The only good nigger is a dead nigger."

Is that who you associate yourself with? Racists?

The 1979 revolution was born out of violence, and if you think it doesn't matter from what situation a government arises from, then just take a look at the government we got after the revolution.

Take a look at the government the Russians got after the Bolshevik revolution.

Take a look at the government the French got after their 1797 revolution.

So I guess it's true: history doesn't repeat itself - humans do.

It's precisely racist idiots like yourself who give credence to the phrase: "the only thing we've learned from history is that we haven't learned anything from history."

Of course the future is going to be bleak for a racist ignoramus who thinks killing is the answer to inflation, human rights violations, etc. And not to mention someone (that would be you) who quotes Hitchens and uses a racist terms against his own people! (turban head)

You're a fuckin shame to all Iranians you fuckin two-bit white boy wanna-be. If you're going to criticize the IRI then don't do it with an adopted racist term from English bigots you dumb fuck.

I've said it before, I'll say it again: You guys are no different then basijis - two sides of the same coin.

Hate begets hate; violence begets violence; toughness begets a greater toughness. We must meet the forces of hate with the power of love...Our aim must never be to defeat or humiliate the white man, but to win his friendship and understanding.

We challenge the culture of violence when we ourselves act in the certainty that violence is no longer acceptable, that it's tired and outdated no matter how many cling to it in the stubborn belief that it still works and that it's still valid.


The man who strikes first admits that his ideas have given out.


What broke in a man when he could bring himself to kill another?


Who overcomes by force hath overcome but half his foe.

I hope a light bulb has gone off in your head by now, but if it hasn't then well, ask yourself:

Has violence solved the Israeli-Palestinian conflict?

Did it solve the Irishs' problems?

Did it solve the Wieger's problems in china?

Violence definitely helped the French resistance against the Nazis. Take your platitudes and stick them where the sun "don't shine".

You're a fool if you think we can change Iran by reasoning with the likes of Khamenei and the Basij.

As for calling me a racist, genius, black people don't choose to be black, that's why racism is irrational and bigoted.

Islamists *choose* to rape and murder Iran's people according to their warped theology, so I'm well within my rights to advocate a violent response towards them.

You IRR apologists really need to get a clue.

I must say Arash, when the last time I visited, I was quite angry at you, for calling the great Reza Shah a "fascist" but on this particular issue I can only concur and commend you for the spirit of patriotism your words conveyed.

Indeed the only good islamist is a dead islamist.

"Violence definitely helped the French resistance against the Nazis"

And no one is advocating "reasoning" with the IRI. You see, your mind is so narrow that you can't even conceive another option besides violence. ONE example. Please - if there is one, I would like to be aware of it.

History has told us over and over again that it doesn't work, and yet we still have people like you who know nothing but think they know everything.

You monarchist REALLY need to get a clue.

p.s. Passion's not enough Arash. In fact, passion, when mixed with the kind of dangerously high levels of ignorance that reside in someone like yourself, can be quite counterproductive.

We are Iranian - you are an idiot.

The IRR is a foreign occupation regime that has attempted to destroy Iranian culture and replace it with Arab-Islamic culture. This is not simply a domestic "struggle". This is the second Islamic invasion of Iran, and the invaders must be dealt with accordingly.

Watch who you're calling a monarchist you illiterate IR mozdoor, how the hell can one be a monarchist and a republican at the same time?! Do you live in a paradox world?!

So no example then?

OK. I'm not interested in simple name calling without any arguments so I guess since you couldn't come up with an example my point has been proven.

No matter if you reframe the issue as an invasion. LOL It might make for good rhetoric, but for those concerned with the reality of the situation you sound like a blithering idiot - as you can see, only shah supporters come to your defense. LOL

So let me know when your feeble little emotional mind comes up with an example.

p.s. AS long as you cal me an IR supporter I will continue to call you a monarchist (and duly so). Plus, what difference does it make if you're a "republican" or a monarchist when your an idiot? They're both the same thing when their subscribers are idiots. LOL

This basiji boy's (Barmakid) comments made me laugh out loud!

After using hate speech throughout his little rant ('racist ignoramus', 'You're a fuckin shame to all Iranians you fuckin two-bit white boy wanna-be', 'you dumb fuck', et. al) he then signs off by saying Peace'!

Whatever. What is it they say? 'Do as I say, not as I do'. That's our little basiji friend here in a nutshell.

I've obviously touched a very raw nerve and you're sore about it. I'm not even going to begin to debate with someone who insults someone else's mother when they run of things to say.

You can quote the great men all you want: but you ain't of one them, dear. You're never gonna be one of them.

More power to you Arash. I'm a great admirer of your blog. Keep up the good work :)

Are you going to explain? Or is that it? I want to hear the explanation to this one.... =)

Thought so Sohrab. I'm sure you realized how foolish that example was...

barmakid is missing his goat herd and feeling blue. That goat with the little tuff of white on it's beard is sooooo cute. As night falls he will retreat to "white beard's" love, making himself one with the goat (once more! YUCK, barmkid! Go wash!).

No REAL Persian woman would have a Basiji so he retreats to the love of his goats.