London Protests in Solidarity with the People of Iran 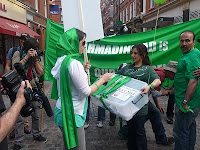 Nice to see a rally in my own country! Pneumonia is my current pathetic excuse not to have attended. Sorry - I could've also seen a good Iranian friend there. However, surely now, after the damning admission of ex-revoluntionary commanders saying that Khamanei had a bolt hole to Syria planned after he used foreign mercenaries to shoot Iranian protesters, proves his total disloyalty and cowardly betrayal to a nation he supposedly leads! Now you can definitely add traitor to his foul list of murderous misdeeds! Word was he even told the opposition that current protestors in jail would be executed if mass demonstrations on the June 12th anniversary went ahead! So, an idea: Maybe now another way to silently protest is for all the opposition to wear black face masks when out walking the streets! After all, the Basiji seem intend on filming everyone, so let the people show that they do indeed live in a black Police State! What would it say for a regime where thousands of people are filmed wearing face masks? After all, they just love to force women to cover up don't they? So let's see everyone against the Stalin of Islam cover their face in mourning for their lose of freedoms! Just imagine the pyschological impact and further public and international damage it would to the dark mullah regime? In your oppressive face mate! Of course I would say the colour Green, but surely a Nation out in black masks would really make the erosion of liberty point!!

Useless. What good is a rally in London?

I have yet to see ONE publication or ONE public official to draw the connection between the virtually absent public demonstrations on the anniversary of the "elections" and the TIMING OF THE SANCTIONS.

How Obama's state department could commit such a strategic blunder is beyond me and can only be described as negligent diplomacy to me.

Furthermore, how the NIAC failed to bring this to the attention of the the US Congress and diplomacy core is equally negligent.

As expats and exiles the only effective way to fight the regime is not to organize rallies overseas, but to help shape the policies of the respective governments we live in.

And we failed to do that miserably.

In all the hullabaloo about the effectiveness of sanctions we did not recognize the real issue: passing the sanctions right before the anniversary and thus undercutting the opposition in Iran in the most effective way possible - eliciting the unifying sentiment of Iranian nationalism aggressively aimed against western politics and policies.

Mousavi, Karroubi ("the Lion Heart") and the rest of them absconded the opposition....

And thus, today, we must be content with an insignificant rally in London.