The American academic, Richard Frye, got more than the Iranian expats who took part in the Ahmadinejad propaganda circus last week. Apart from free flight ticket and accommodation, Professor Richard Frye was also given a residential house in Isfahan.

Frye accepted this generous award at a time when the regime had issued an arrest warrant against the human rights defence lawyer, Mohammad Mostafei, and had taken his family as hostages. Frye accepted this reward when 17 Iranian political prisoners are on hunger strike and their families have been beaten up for protesting outside Evin prison. Why are these academics so remote from what goes on this planet? How long does the 90 year old Frye think he has left? Is it worth taking this blood gift in the last days of one's life? Is it worth leaving such a legacy? I hope the regime's days are as numbered as his. 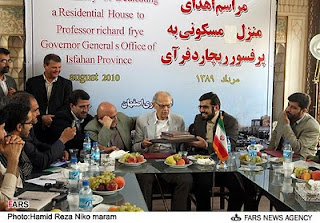 Presumably they expect him to convert into Islam in return, they have left him a prayer mat in his bedroom: 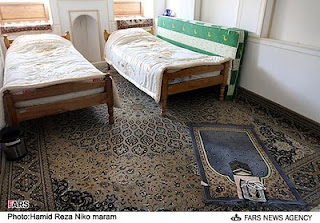 Showing off his state of the art shower, but will be able to wash off the stain on his name: 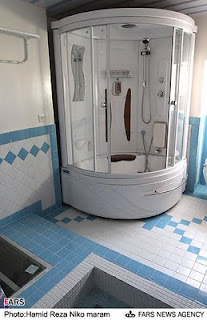 I wonder who he will dine with: 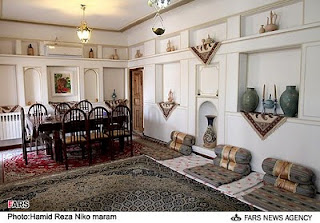 Perhaps Frye just subscribed to the George Galloway package tour? You know the one: Get your ego pampered and your conscience paid off by any anti-Western despot - provided you publicly suck up to them..! And then of course safely return to the bosom of your own Western home to enjoy all it's cosy comforts and the liberal laws that can be so easily exploited and stay smugly protected under! Yep - makes yer bloody sick don't it!