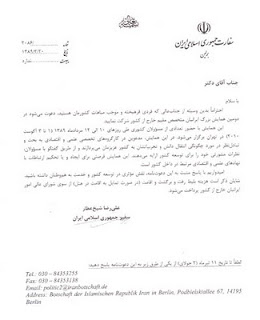 For several months, Islamic Republic embassies throughout Europe and North America have been searching for Iranian expats to attend a propaganda conference to promote Ahamdinejad and his administration. A masquerade disguised as the get together of the Iranian 'elite' outside Iran, but the real purpose was none other than to demoralise the population inside Iran by pretending the government enjoys widespread support outside Iran.

Once the so called expat 'elite' were short listed by the embassies, the letter seen on the left here was sent to them. The last paragraph undertakes the entire cost of the trip and the accommodation etc. will be paid by the government.

This conference was held over the last two days in Tehran. So lets see who some of this pro-Ahmadinejad elite are.

And why not start with our own favourite George Galloway, who despite losing his seat in the parliament, is still introduced by the Iranian state TV as a UK MP. How he fits in with the Iranian 'elite' baffles me:

and here is Sheikh Mansour Laghaii, the Iranian Shiite cleric who was deported from Australia. Does he still count as an 'elite expat'? 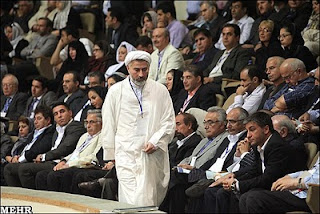 And of course the familiar London based Parivash Fatemi, who used to wine and dine with the Shah's generals in the imperial court cocktail parties [Picture on the Left] but is now suddenly keen on wearing a scarf [Picture on the Right, back row] and applauding over enthusiastically for Ahmadienajd: 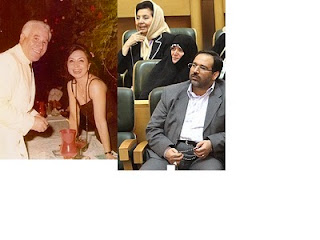 This character, I don't know who he is yet, wins the super sycophant award of the conference. He claims he trains pilots abroad and that he was about to sign a business deal worth 8.5 Million Euros but because there was a petty insult against the popular Mr. President, I refused to sign the contract! Yeah Right!

And here is a BIG Iranian expat 'elite' studying the lunch menu next to probably some clueless arsehole expat 'elite' who has probably been put off lunch for a while: 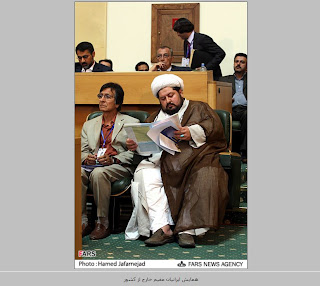 And watch this from last year, take it forward to 2:46, yes it is Ali Dezaii who sadly couldn't attend this year's conference, as he is now a guest of Her Majesty's Prison.

Surely there has to be some technicality that would have Galloway expelled from being an MP for backing other governments, who happen to be anti-UK, such as the IRI and Hamas...? Governments who have crimes hanging over their heads?

thank you for the faces and names of those who enjoy freedom of speech while denying it to others.

Well Ahmanadinejad can attract as many glass house and Ivory tower personalities as he likes. The fact is, if he can't even half fill a stadium with bribed bus loads of people, then it's the ground swell that really counts. And no ivory tower nor glass house of this self-deluded regime will survive the people's Earthquake that is still ultimately coming!


Virus Mother can change, actually ( I can get the handprund get strike)

1. Vaksin get from horse or other blod carrying, from mikroorganism live and get new individual from blod. You must looking for mikroorganism from many animals in your habitats, and get microorganism with koagulan blod centrifugal with glucose, take that microorganism to horse blod to get new individual, get microorganism with glucose, inject to human blod.
2. Get Male or Female from hormon, get a horse male meet with horse female, until horse male responsies a female, dont get until together, get a blood male horse responses female, blod centrifugal( NaOH (mixing))to get hormon. Inject to another individual.
3. Another drugs with enzim is same as toget enzim with number 2.

4.Its Get Female from hormon, get a horse female get out hourse run until tired/trusty, get a blood male horse responses female, blod centrifugal( NaOH (mixing))to get hormon. Inject to another individual. That get female individual(get AminoAcid/ so get stopped hormon on the blood(body)(get losses hormon))


Get Cloning or tube baby