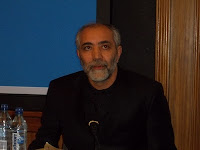 Ardeshir Amir Arjomand is a former law professor at Beheshti University and a top adviser to Mir Hussein Mousavi. He was detained after the post-election protests last year but managed to flee Iran. Pro-Ahmadienjad sites like Javan Online, described him as Moussavi's legal adviser in his campaign HQ, and as usual, accused him of having links with the MKO and foreign intelligence services etc.

Yesterday he spoke at the Wilkins Gustave Tuck Lecture Theatre, UCL, where he described the Green Movement as a pluralistic movement with no centralised leadership command centre and a modus operandi of non-violent struggle based on tolerance of other views and adherence to basic human rights principles. 'The hardliners have shown they have nothing but violence as their only means to remain in power. They also realised that they are unable to use all of Baseej and all of Revolutionary Guards to crackdown on peaceful protesters and hence they had to deploy criminal thugs and hoodlums to confront peaceful protesters. They have passed the peak of their ability in suppressing the movement and the only way for them now is down. This is what they are scared of and this is why we should remain optimistic about the future. If we lose our hope, we would have handed the authorities a winning card they desperately need'

After his speech he fielded a range of questions without any hesitation or red boundaries which included questions like Mousavi's role as the Prime Minister during the 1988 massacre of political prisoners, Moussavi's economic policies for the future, the next phase of the struggle for change and evidence of cheating in the elections.

On the evidence of election fraud, he said not only there were numerous irregularities but the results were engineered as well. He then listed a number of these irregularities and said there was even an audio recording which commanded what the provincial counts should be announced as regardless of what the actual counts were. Most of all, the very fact that the regime refuses to set up an independent commission to review the complaints made about the election fraud, itself is indicative that the elections were engineered.

Arjomand then used the case of Taraneh Moussavi, as an example of how the regime tries to block the truth and any investigation into the truth. He mocked the pathetic attempt by the administration to pretend the only Taraneh Moussavi in a similar age range resides in Canada and swore on his honour that he, himself had personally interviewed an eye witness who was detained with Taraneh Moussavi at the time.
Posted by Azarmehr at 11:41 PM

Well if as ALWAYS known, the regime now does rely on thugs and vandels to help paper over it's ever growing cracks, then this must surely confirm the dissatisfaction within some of the Revolutionary Guard and Basiji ranks. Some of these people must go home and be confronted by the proper moral compass of their families everyday... So not everyone within this black establishment can easily sit with their conscience of how NOW they have just become Stalinistic mercenaries against their own people! Rasfanjani recently got a letter from a list of unjustly jailed political prisioners. He hates Ahmandinejad and has had enough amble evidence - even from his own daughter and son to clean out house. But of course he won't! Again it all boils down to fear and pride. The pride that he made Khamanei the Supreme Leader and so would sooner save personal face by leaving him in. Plus the fear that the whole Islamic system might collapse if he starts exposing, sacking or even arresting those who have brutality, greedily and sadistically abused their position within it. But then again, Rasfanjani himself has just has much greed and blood on his hands too!
Thereby, has I've said - others and said, and now even Iranian University studets are saying: The regime is sitting on a people's volcano. The more they try to put a lid on it, the bigger, widespread and merciless will be the explosion! Those who live by the gun, will die by the gun. And such will be the fate of any despotic regime who lives by violence or the end of a rope!

Omid Habibnia ,who broke the "Taraneh Mousavi" story, has since admitted it is just a hoax and his sources lied to him.

I dare say most of these horror stories coming out of Iran, where people have been declared dead even though they are alive, are just malicious propaganda put out by the likes of........PA.

Reza, Omid Habibnia is a cock!

Derakhshan became hated when he started to defend his country's nuclear program and rights. You would too if you supported Iran's national interests. I still don't know why you consider yourself a "nationalist" when you seem to think the West and Israel can do as it pleases regarding Iran.

Omid was the same fraud when he spread this rumor as he is now.

The fact is, the story is based on a rumor launched by Omid and two other journalists. The two journalists who are sticking with their story have tripped over each others' lies over and over. I have documented this extensively.

It is truly pathetic that people still fall for these charlatans.

There are enough horrors coming out of the Islamic Republic that we don't need these irresponsible dokandars spreading nonsense like this.

And by the way, what ever happened to the Saideh Pouraqayi rumor?

Reza, that's right, everything is a hoax. All those thousands of videos demonstrating the brutality of the regime, all hoaxes!!! You are a sheep, misguided by your anger. You live in the west, enjoying the fruits of a democratic, open society. Yet something appears to have made you angry, betrayed and even insecure.

I coud create/publish an article on the internet claiming the absurd, does that make it true? The difference is, we have EVIDENCE showing the nature and direction of this junta. Anyone with even a remote brain capacity can see the videos of slayings on the streets and clearly see the agenda of this murderous regime. Keep on spouting your crap Reza, i pity you, life's to short to be angry and misguided. Condoning evil, murder and tyranny will get you nowhere.

There are two reasons why I don;t find you credible.

A) Your first reaction should have been to want to speak to Arjomand if he says he spoke to a witness who was detained with Taraneh Moussavi, rather than basking in your library that you have found some contradictions without ever having a tangible experience of how difficult it is to get real news out of Iran

B) You never mention anything in the regime's pathetic attempts to discredit the story. For example how they got some family on TV claiming they were Taraneh Moussavi's family while showing them a different picture of Taraneh Mousavi

C) You also make no mention of Alviri's statement

It does you no credit to peddle the case of Taraneh Mousavi which Amnesty International has admitted, not just QLine,is deeply flawed.

There are real abuses documented in Kahrizak, the Tehran student dormitory and so forth. By all means, bring these up and name and shame those responsible.

For the record, this is the same Reza Esfandiari who wrote an article on Iranian.com claiming that Neda Agha-Soltan was not actually killed by the Iranian regime.

I was going to say that Reza would even look into the eye's of Neda's mom and tell her it was not the regime who really killed her daughter, but I realized he is just a worthless keyboard warrior living in the West, and would lack the actual courage to do something like that.

Absolutely. I would be happy to meet any member of the Agha-Soltan family and offer to help find her murderer who is being protected by western governments. Please read my latest piece which includes reference to the media distortion surrounding Neda's death.

I myself was lied to by green fanatics who claimed she was only 16 and was killed fighting the Baseej.

Reza, you call that a "piece"?! It's complete non-sensical, agenda-driven tripe.