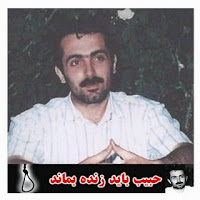 On Sunday most people in the free world will be recovering from celebrating the festive season. Quite right too, life is all about working, contributing, loving, resting and enjoying its moments. The terror machine of the Islamic Republic, knows no such things however. Its one efficiency, bringing death and misery to its people remains unhindered.

Born on 21St March, Iranian New Year, 1981, Habibollah was a gifted child. He loved sports and excelled in football. He played for Sanandaj Municipal football team but quit playing after it was required of him to join the local Baseej militia. In 2002, Habibollah entered the Ilam University after having graduated with a Maths/Physics diploma to study Industrial Engineering. He was also keen on working with NGOs and cared much for environmental issues. He joined two environmental NGOs, Zhianeh Vah and Shahoo.

On 23rd October, 2007, he was called by the owner of a computer repair shop and was told his computer was ready for collection. The shop owner insisted that he should collect his computer that very day and Habibollah obliged not suspecting what lay ahead. Eleven security agents were waiting for him at the shop. He was arrested that day and spent four months in solitary confinement. The beatings he received during the interrogations resulted in bleeding from his kidneys. Habibollah was taken to hospital and was seen by a relative, who could barely recognise him. Swollen eyes, black and blue face with cut fat lips, unable to walk himself and being dragged up the stairs by three security agents, was how his relative described Habibollah when he saw him. It became known later that Habibollah had suffered a severe beating by six prison guards and interrogators. He had three cuts to his head, had been repeatedly kicked in the face and beaten with truncheons. Habibollah was unable to stand or sit for four weeks.

Habibollah's interrogators promised to free him so long as he testified against his other inmates. Habibollah refused and he was threatened with execution.

On 3rd July, 2008, Judge Hassan Babaii, sentenced him to execution, in a trial behind closed doors which lasted only a few minutes. Seven months later the same judge upheld his sentence and even suggested to Habibollah 'Now that you face execution, you may as well accept responsibility for some other charges, so I can have them done and dusted'

Habibollah's sister, Elaheh was also locked up by Judge Babaii, after she told the media about her brother's plight. Omid, Habibollah's brother, who had gone to court to enquire about his brother, was also detained and beaten up by Sanandaj court's security guard chief, Hamzehi.

Thus, the 28 year old Iranian student, Habibollah Latifi, faces execution on Sunday. Meanwhile UK students, continue to appear on Press TV, a television which is funded by the same state that kills students and as yet have not given a statement distancing themselves from the Iranian regime which pretends to champion the cause of UK students. One statement by the NUS could save Iranian student, Habibollah Latifi and demolish the Iranian regime's attempts to exploit the student protests in UK for their own propaganda benefit.
Posted by Azarmehr at 6:08 AM

why if in iran such things take place still:
a)isn't there a revolution to overthrown this regime
b)the West still only cares for the enrichment program! there is a humanitarian in Iran, yet America and Europe put pressure on Iran only about their nuclear ambitions.