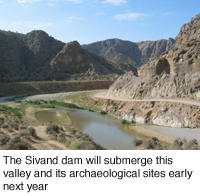 Ever since the 1979 frenzy, I have insisted that our country, Iran, has been under foreign occupation.

The new rulers of Iran changed our Iranian symbol of Sun and Lion in the national flag and replaced it with some new symbol of their own which resembles that of the Sikhs but has no roots in our traditions and history. On top of that they introduced foreign writings on our national flag. In short there is nothing Iranian in the present day Islamic Republic flag of Iran.

When they asked Khomeini on his flight back from 15 years of exile, "what are your feelings now that you have entered Iran again?", he simply replied "Nothing!". He was telling the truth, Iran was not important or relevant to Khomeini.

After seizing power, Khomeini tried to ban our beloved long held tradition of celebrating the first day of Spring as the Iranian new year, as well as our other traditions and celebrations like the fireworks on the Last Tuesday evening of the year, all national traditions which represent our national identity have been frowned upon..

The mullahs almost immediately attempted to change our Persian language which we tried so hard to keep alive throughout the centuries. Arabic words were forced into our vocabulary which we had no prior knowledge of. Words like "Taghoot", "mofsed-fel-arz", "mohareb", "monafegh" etc. Almost all references to the word National were replaced by Islamic, thus the National Consultative Assembly became the Islamic Consultative Assembly and so on.

In the state sponsered films made in Iran, all the bad guys have Iranian names like Kourosh, Manoochehr, Kambiz. All the good guys on the other hand, all have Arab names like Mehdi, Mohsen, Ahmad...

The clerics have desperately tried to ridicule and discredit our national heroes. The illiterate Sheikh Khalkhali, the mad mullah and the butcher of Kurdistan whose hobby as a kid was strangling cats, by misreading a Persian history book claimed that Cyrus was a transvestite! -He misread rAhzani as rAhe zani :))

The loathing of our pre-Islamic Iranian heritage is far too obvious by the mullahs. No other rulers but foreign occupiers would attempt the changes listed above. Only a foreign usurper would attempt to change the national flag, national symbols, national celebrations and national language of a country and profess to have no feelings for it.

The mullahs have shown no enthusiasm in preserving our national pre-Islamic heritage sites. Only the people of Iran through their deep rooted nationalistic instincts have managed to keep our sites of heritage from decay, ruin and destruction.
The mullahs instead have done their best to maintain and flourish landmarks and mausoleums of the Arab invaders which are left in Iran.

Perhaps the biggest eyesores for the Mullahs are Persepolis and the Tomb of Cyrus in Pasargadae. Their attempt after the revolution to bulldoze these ancient sites failed but now they are having another stab at it by building the Sivand dam at Tangeh-bolaghi.

More than 100 of Iran's potentially most important but least examined archaeological sites, including Pasargadae, the city built by King Cyrus the Great, will be flooded. Archaeologists believe that even the mausoleum of Cyrus the Great will be at risk.

Pasargadae was built on the site where Cyrus defeated Astyages, the leader of the Medes, in 550BC. One reason why the mullahs scorn Pasargadae and Cyrus so much is because it was the capital of the first Asian empire which respected the cultural and religious diversity of its people.

The dam is due to be opened in March 2006. We, the children of Cyrus, have less than one year to save our forefather's resting place.

These were the last words of our forefather, and the founder of our nation:
"I am Cyrus, son of Cambyses, who founded the Empire of Iran, and was King of Asia. Grudge me not therefore this humble tomb."

Very Nice Blog Keep Up The Good work. I have a blog if your looking for computers digital cameras mp3 players dvd burners sotware. Your find all the best deals from the best stores on the net.

All Computer and Electronics shopping in one location

Hello, I am a korean visitor, good to see you.
I am sure that your blog page looks great to me which mean looking crowded so, I would like to let everybodies know korea information official site korea.net same as Dynamic korea - contains all about korea news and informations, please let me introducel this cool site. Dynamic korea offer korea travel, culture, food, arts and government info exactly what you want to knowteach english in korea. You better check it out some time.