Another Untouchable Islamic Cleric in Europe 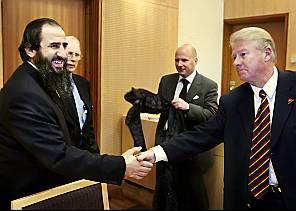 After writing about the mysteries surrounding the alleged mastermind of the London bombings, Haroon Rashid Aswad, someone contacted me with information regarding another Islamic cleric who seems to be enjoying the protection of PC European statesmen.

The Islamic cleric is known as Mullah Krekar. In Kurdish "Krekar" means labourer or toiler. His real name however is Faraj Ahmad Najmuddin but he has used many other aliases as well. Born in 1956, Mullah Krekar was the head of the Jund- al-Islam, the precursor to Ansar-Islam in Iraqi Kurdistan. An extremist group similar to that of Taliban who for a while ruled parts of Iraqi Kurdistan according to strict Islamic rule.

Mullah Krekar was expelled from Holland but then seeked asylum in Norway. In Norway he became the darling of the Left and participated in peace marches. Presumably the Norwegian Left, like the rest of Europe, admired Krekar's "anti-American" stance and ignored his atrocities, implementation of Shariah law, repressive measures against women etc.

During his asylum in Norway, Mullah Krekar seemed to be free to travel around the world, even back to Northern Iraq, where he committed more crimes. Yet whenever there was talk of legal action against Krekar, some of the left-wing politicians in Norway, defended him and asked for a halt to such witch-hunts. Several court cases against Krekar were dropped for lack of evidence or for fear of the mullah's life being in danger, if he is returned to Northern Iraq!
In other words its ok for Mullah Krekar to return to Northern Iraq and kill and torture more innocent victims, but heaven forbid if the Mullah's human rights are ever infringed.

In one instance, Krekar reported a female Muslim comedian, Shebana Rehman to the police for lifting him off the ground during a television programme. Rehman was subsequently pilloried for cultural insensitivity by several Norwegian commentators. Can you believe this??

So enough of the background on this Islamic militant turned into a European celebrity and the darling of the European Left, I think you get the picture. This is the information given to me by a person who met Krekar in Iraq. I will refer to this contact as 'K'.

'K', who is an Iranian Kurd, crossed over to the town of Biareh in Iraqi Kurdistan in 1999 to visit some of his family members. At the time Jund-al-Islam were ruling the town with their usual repressive measures. Ban on TV and pictures, burning of un-Islamic books, the Sharia law, all the usual Islamic restrictions were in place.
'K' told me however that on top of all these, Jund-al-Islam members spied on people inside their houses too. If a woman was not covering her hair, even inside her own home, the family were forced into paying fines and if the "crime" was repeated again they could even face losing their home.

'K' said he went to some of Mullah Krekar's sermons out of curiosity. He described Krekar as an able and fiery orator who could easily stir the passions of his audience. A very dangerous person who explicitly told his audience to kill the infidels.

'K' quoted Krekar as having said to his audience "if you kill just one non-believer, you will be rest assured of your place in paradise."

Apart from the celebrity status Mullah Krekar enjoys in Norway, he has also been provided with a council flat and receives benefit payments from the state. 'K' on the other hand, who was a secular student activist in Iran and fled the Ayatollahs, is still waiting for his refugee status after 5 years.

This is Europe gone mad. This madness can only stop if the European citizens break their indifference and put pressure on their politicians. The likes of Mullah Krekar and his followers are against the very fabric of the European society. The gutless European politicians who have warmed to these evil figures are cooking up a very deadly future for their citizens.

Columbia Record reborn as blog
The Columbia Record, which ceased publication in 1988, returns today as a Web site designed to let citizens report directly on community news.
Hello there. Nice Blog! Well done, will check back soon.
I have a affirmation site. It pretty much covers affirmation related stuff.
Check it out if you find the time :-)

Search Engine Journal's Spotlight of 500 Search Engines
Search Engine Journal has now been in existence for over two years now and we've been having a great time reporting on aspects of the search engine world including SEO, SEM, Local Search, Portals, and of course ...
Hey, you have a great blog here! I'm definitely going to bookmark you!

Hi, I was just browsing through some blogs to get some ideas for mine, I hope you don't mind. I would like your opinion because you have a great blog here! I wish to start writing about trade the forex. What do you think? Come and check out my site let me know if you think my topic would spark an interest. Best regards.

Thank you, Lot of Valuable Info on Your Blog. I have a forex trader forum Site. It pretty much covers ##KEYWORD## related stuff.

Wow what a great blog. You've piqued my interest.. The forex market is also one of my interests along with forex online. Thanks for the info.

I liked your blog. I found many interesting information here.
I also give free info about course forex free trading on my
href="http://www.WebTradingSystem.com">Forex Trading System site.

If you have time please visit my web site to get some free course forex free trading
information.