At the American Way School in Memphis 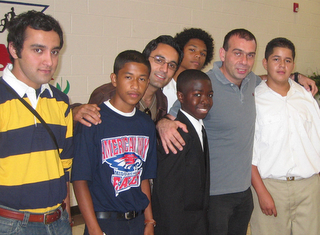 I kept thinking I will write about our US trip starting from day 1 and so on. However after three weeks absence I am so snowed under that I may not be able to start working on that straight away. Yet I promised the kids in the American Way school in Memphis, I will post their pictures and write about them asap when I return. Since I dont like letting kids down, here is about the pleasant experience we had in Memphis.

We were greeted by William Tucker (in his suit and tie), Alex (to William's right), John (behind me) and Andreas (on my left) from grade 8. All three were a credit to their school. So courteous and welcoming. They gave us a tour of their school and the way the school runs. They showed us their school library and their computers which were connected to the internet. I tried to access my blog but it was blocked :))

I then gave a little talk about Iran to a class. I talked about Iran's geography and a brief history of Iran starting from Cyrus the Great. In order to keep the kids interested, I said I have a little present for whoever asks the best questions. I had a copy of the Return of Schehrzad by Eric Jerpe, which is fiction novellete but it gives a lot of information about Iran and its history.

After the class we had a VIP school dinner. I found that Alex's family only migrated to US two years ago from Honduras, and he did not speak any English when he first enrolled in the school. It reminded me of my first years in England. I encouraged Alex by telling him that he is so lucky, because he will be completely bi-lingual and bi-cultural, something very useful in the global world.

When we finished dinner, one of the kids came up to me and reminded me that he had asked the best questions and deserved to get the prize I had promised :) I was more than willing to give him the book but one of the school officials objected because the picture of the woman on the cover did not meet the school's standards!

I was shocked at this denial of knowledge for the sake of such unnecassary prudence. This however was why our trip was so varied. We had to learn aboul all aspects of life in America.

Tremendous picture. Did you visit the "Grace Land"?

Anonymous said...
This comment has been removed by a blog administrator.
9:12 AM