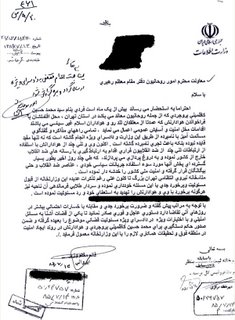 This document shows the deputy intelligence ministry, Iravani, writing to the special section on clergy in the Supreme Leader's office requesting a "capable" judge to be appointed to issue the arrest warrant for Ayatollah Boroujerdi who is advocating a non political Islam.

The document also shows Commander Talaee's reluctance to lead the arrest operation, saying that he has threatened to resign if force is used to arrest Ayatollah Boroujerdi and his supporters.
Posted by Azarmehr at 2:02 AM

This document clearly shows IRI is lying about the broujerdi affair. The regime claimed that Boroujerdi was claiming to be the hidden Imam, yet the document clearly shows that his crime was wanting a separation of church and state. It is in fact IRI figures like the president himself who are constantly claiming contact with Imam Zaman!!!!

Doroud bar tou Pasha. The entire democractic minded, secular Iranians need to unite and dome Akhoned rah grefteh va az ghodrat paein biavarand. Our popular slogan should be Akhoned Bar gard beh Masjid. This takes work, because we still have some people who think real Islam is different. They need to understand that religion and politics are toxic mixture. All religion and more that all other religions, Islam, requires absolute obediance. And any 7 year old can tell you that anyone who requires obediance, takes away all your rights.