Before coming to Sterling, Illinois, I was under the impression that the people of this small town wouldn't know anything about Iran nor would they be interested in anything outside their state. How wrong I was!

Yesterday morning, we went to see Ted Aggen, the Mayor of Sterling. We were received by the Mayor and his deputy Amy Viering. The city manager, Jay Wieland, gave an excellent presentation on how the town is run, how the revenues are collected and most importantly how the town coped with the closure of the local steel mill. It was interesting to hear how the spirit of volunteerism and the foresight not to fight a changing world but learning how to comply with the new situation, had pulled the town through the difficult times.

In the evening we had a pot luck dinner with a group of peace activists. It really was a pleasure to be received so warmly by such enlightened people that cared so much about the world. The peace group went out of their way to make us feel welcome. Personally I was embarrassed to be given such VIP treatment. We talked around the dinner table, then each of us were introduced by one of the group members who read a short bio about us. We each gave a brief talk about Iran and then fielded some questions. I must say every question was a relevant and intelligent question. I hope I answered them well and gave them some more understanding about the situation in Iran and the global threat of Islamic fundamentalism. 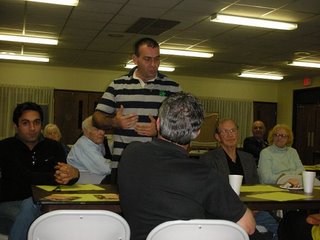 This morning we went to Rock Fall middle school. Again the reception we received was exceptional. I gave a brief talk about Iran, where it is in the world, a brief history starting with Cyrus the Great and the first declaration of human rights and the tolerance Cyrus exercised with the citizens of his empire, abolishing slavery and giving people the right to practise their religion. We met with three large groups between 10am and 12 noon.
Once again we fielded a lot of intelligent questions from the pupils and the their teachers as well as the local press. My main message to all the three groups was to fight political apathy and to appreciate the privileges the American youth have inherited and not to take it for granted.

In the afternoon we went to a farm and saw at first hand the efficiency with which an American farm is run. Once again I was so surprised to learn that a farmer in Sterling, knows quite a lot about Iran and is interested to learn more about our country. Dan, the owner of the farm started the farm back in 1980 while he had a $10000 debt after college. I forget how many acres he said he farmed, but believe me it was huge. We also had a lot of fun getting a ride on his combine and tractor.

Tomorrow we will leave Sterling. Like all the other places we have been on this trip, we have been met by a lot of warm and friendly people who have really made us feel at home and left us with a good impression of the American people.

I am also in the States... check my blog for some DC pictures if you like