Well there you are, the inside information we were getting from the Iranian embassy banquet at the Millennium Hotel, Gloucester Road was spot on. The Iranian state TV showed some of them and broadcasted their treacherous remarks. Such shows have a very focused purpose. Its all part of a psychological warfare to tell the Iranians inside Iran that despite all the sacrifices they made and all the blood they shed, its business as usual and even the comfortable ex-pats in London are supporting Ahmadinejad's junta administration. Thats why it is important for the rest of us to make sure these traitors will not go unnoticed.

The Iranian state TV broadcast shows Parivash Savsati-Fatemi, widow of Dr. Fatemi [Mossadegh's Foreign Secretary] , giving her unequivocal support to Ahmadinejad. There is no mention that she is also the sister-in-law of General Rahimi, the Shah's Chief of Police for Tehran who was executed after the revolution, nor does the state TV mention Parivash Fatemi's frequent participations in the parties at the imperial court.

Some of the others mentioned in the state TV program about the event are Dr. Ali Salamati, Dr. Ghorbani and a female sculptor named Ghahari.

and here is Ahmadinejad's provincial tour to Birjand boycotted by most residents of the city.
Courage and resistance by the people of Iran, treachery and duplicity by a few Iranian ex-pats

Just another reminder of Parivash Fatemi, wearing an open neck and back dress, at an Imperial Court cocktail Party with her brother-in-law, the late General Rahimi. No scarf in this photo. 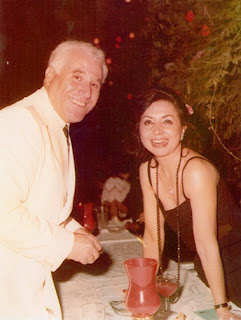 What can one say other than the fact that these people are sociopaths and since they loooooove that regime so much, they should go back and live in Iran under their adored supreme leader and his 'boy' Mahmoud.

The important thing for Parivash Fatemi is that someone gives her dinner, whether its the Shah's cocktail parties or the Islamic Republic embassy banquets in the Millennium Casino hotel doesn't really matter

telling him what you think of him
and the Principal of Faculty of Medicine : Professor Smith

Asking him to remove this man from the university staff

according to Government figures 107000 were supposed to have voted for Ahmadinejad in Birjand. So where are they??? I think they manage to get more traitors in London

it was a difficult situation for many professional Iranians who were invited on the basis of their education and academic achievments,not their political views.
I wish you were all there. Calling the guests traitor is not right.How can you judge people on attending a party from their own country embassy??all the lectures on that night was about Iran and iranian culture and history and academic acheivments,( however it could have been thousands of times more) regardless of religeon.

If they used this as a political gesture, it is their own sin, not the guests.

This kind of political attitude which was going on for 30 years is a childish one , you political people who call yourself iranians never managed to have any unity and team work to be able to make a change, just accusing eachother for wrong doing and trying damage each other's reputation by whistle blowing.Have you acheived any thing so far??
Think twice.Please. Grow up.

It's good that you managed to find the state TV footage of the event, keep up the stuggle against this terrorist regime.

You people really make me sick, you should all go back to Iran instead of shouting in the comfort of England, you should all really be standing shoulder to shoulder with the ones in Iran, not the fake Iranians in the UK, what can you achive in the Uk, Nothing, Nothing I tell you. So carry on making your complaints and eating your cake, but remember if the government does change in Iran there will be no place for any of the ex-pats and you will be treated by foreigners in your own country becasue when the people really needed you, you were all in england....

However you want to kid yourself about what was said there, you were all exploited by the regime as can be clearly seen on the state TV footage. The whole purpose of this exercise was for the government to humiliate the people in Iran and say to them we can even buy the expats in London. Certainly what Parivash Fatemi is talking about is nothing to do with history, academics but pure government propaganda, whether you like it or not you were all used and its up to you now to redeem yourselves and publicly distance yourselves from the regime

"How can you judge people on attending a party from their own country embassy??all the lectures on that night was about Iran and iranian culture and history"

If you claim that the Islamic Republic is "your country", you most certainly are a traitor imho since you are bowing to a terrorist occupation regime.

As for "Iranian culture and history", what on earth does the Islamic Republic know about that? It is an occupation regime that for the past 30 years has attempted to destroy Iranian nationhood and replace it with Arabo-Islamic culture. Your points are illogical.

all you academics, old-timey hot shots or whatever you WERE...if you ATTEND an event sponsored by the khoonkhar regime, you are whoring yourselves. Don't fool yourselves. I'm with Potkin on this one. SOME dinners I'd go to but NOT THIS one...

What a dirty old cunt, that Fatemi bitch is.

You should remember this is the wife of late Dr. Fatemi that you are attacking. Both her husband and general Rahimi were Iranian patriots trying to serve the "appreciative" nation of Iran. Are you related to "Akhoonds" criticizing this lady for an evening dress she wore decades ago?