The Courage of Iman Al-Obeidi 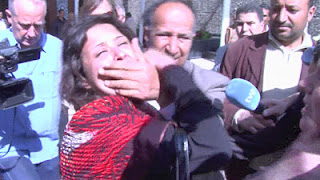 So many crimes and atrocities by the despotic regimes around the world go unnoticed. Thanks to technology like mobile phones with cameras, the world today is witnessing some of these human rights abuses in these despotic countries. So much still goes unnoticed and what we are seeing today is still the tip of the iceberg.

Technology on its own is useless however, without the courage of the individuals who apply it. The courage of protesters, citizen journalists and the likes of Iman Al-Obeidi who tell the world about the crimes committed by these tyrannical regimes.

Iman Al-Obeidi must have known what will happen to her once she described her ordeal and the kinds of despicable crimes which go on in Libyan prisons. She must have known the group of journalists with cameras at the Rixos hotel will be no match for the government minders and security thugs with knives and guns and that she would be facing her terrible ordeal all over again. Iman Al-Obeidi however consciously decided that the world must know what the Libyan regime is about. A tyranny of one mad man who is prepared to sanction his security thugs to gang rape a citizen and then urinate and defecate on her.

Gaddafi's regime reacted in the same text book methods used by other tyrannies like the Islamic Republic. First they tried to character assassinate her by claiming she was drunk and mentally unstable, then they tried to pay off her family if she changed her words, but again Iman Al-Obeidi's courage shook the pillars of Gaddafi's regime when she said 'I will die rather than change my words'.

Yet the useful idiots continue to ignore the suffering of the millions living under these tyrannies. The UK based pro-Libyan Trotskyist group calling itself, Workers Revolutionary Party, make no mention of Iman Al-Obeidi and continue their unconditional support for their beloved mad man sponsor. If there was a Libyan TV broadcasting from UK and they had managed to bring Al-Obeidi on air, OFCOM's Adam Baxter and Trevor Barnes would have probably rejected the complaints by accepting the licensees' assurances that she was a "willing participant".

Posterity however will remember Iman Al-Obeidi as a symbol of courage and integrity and the useful idiots for just what they are, a bunch of gullible idiots, willing participants in pulling the wool over their eyes and supporting tyrants for their own warped ideologies.
Posted by Azarmehr at 11:32 PM

Don't worry though - the Islamic Gestapo - otherwise known as the Iranian Basiji are currently releasing a video saying that the 12th Iman of Mahdi is about to return and solve everything. Soon he will come back to wage war. Obliterate Israel and America. Make everyone a Muslim. Make Iran his virtual homebase. And personally thank Khamenei and Nasrallah for spreading the brutal bloody branch of Islam through lies, cheats, oppression, bullying, thugery, gun-running, terrorism and state sanctioned murdering!!! Tut, it really IS insane when such Men are in charge isn't it? Not only believing in such man-made fallacy and lunacy, but also twisting the fairytale to make themseves out as champions! God help us all should such dick-waving psychotics ever shout Allah Akbar by pressing the nuclear red button! Therefore for the sake of rational common sense and the planet, we can only hope that this so-called 12th Iman is really the collective FORCE of the People demanding Democracy. And so finally put an end to such supersitious dangerous madness that currently ill's such diseased power-deranged orgainised religion mentalities!