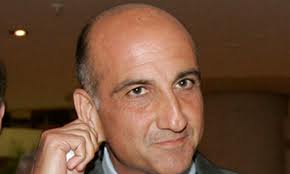 Narcissist Iranian expat millionaire, Amir Hossein Jahanchahi, who has been trying to pose himself as an influential player in the opposition to the Islamic Republic with his two man team known as the "Green Wave" has sunk into new depths by slandering one of the defected diplomats as an IRI infiltrator.

Farzad Farhangian, the Iranian diplomat who defected from his post as the Islamic Republic's embassy press attache in Brussels, left Brussels for Norway, fearing for his safety and that of his family in Belgium. At the time, Jahanchahi obsessed with seeing his name and picture in the media, duped some media outlets that he had been behind the defection and had been funding Farhangian as well as advising him on immigration and security arrangements. One year after Jahanchahi's constant false claims in pretending that he is behind the defections, the defected diplomats issued an explicit statement that denied Jahanchahi's claims and that they have anything to do with the two man team known as the "Green Wave".

Last week, the Norwegian authorities deported Farhangian and his family back to Belgium, as part of the Dublin Convention. Basically the Dublin convention means if Farhangian applied for asylum in Belgium and Belgium is regarded as a safe country, his asylum should be decided by Belgium.

Jahanchahi however, enraged by the diplomats denouncing his claims, has published an article on his site  claiming that Farhangian was deported from Norway because the Norwegian authorities had identified him as an IRI infiltrator! Jahanchahi also writes that all the defected diplomats who issued the statement against him have been expelled from the Green Embassy Campaign!!

The defection of the diplomats was a source of joy for the Iranian public, it was another sign that the Iranian regime was crumbling, but once again a dubious Iranian millionaire, who for the last three decades had not cared about any of the injustices taking place in Iran has tried to smear and tarnish the reputation of these former diplomats for his own obsessions of vanity.

The defected diplomats are men of integrity who gave up their position and all their privileges to stand by the people of Iran, despite all the consequences of hardship they faced as the result of their defection.  Jahanchahi's attempts to tarnish them will get him nowhere other than expose him for what he is, a conceited self loving impostor who does not realise reputation and integrity are more important than money.

I have been watching you for a number of years. I always thought you were high strung but never a liar. Your comments regading Jahnashahi is more a reflection of you than him or anyone else. You are the one without integrity and you the liar and self righteous ass who refuses to remove the blinkers. You will probably not publish this because your behaviour is no different that the IRI. You take sides without fact, write lies as though they were the truth and poison minds without reason. You are the imposter! Prove at least that you are not don't blank unfavourable comments by publ;ishing this comment.
F. Soltani

Funny that because Velma Anne Ruth of ABS Community/CIS swore by his power. Then again, she did say he had a lot of money...perhaps that's why these sell outs were interested in him...

Typical though, a lot of Iranians want in on this Green movement because they think it's a good way to get women and fame.

You are right %99 of times and always to the point. Just %1 you are wrong and it is related to CIS and me that it will be forgivable! I like you a lot my best TORK friend.

I give you until Sunday to prove you are someone called Farkhondeh Soltani, otherwise I will assume you are none other than Jahanchahi himself or his side kick

I'm glad we someone with the backbone to reveal the truth, so many come, read and go. I appreciate your feedback. One of those defected diplomats, Abolfazl Eslami was guest of mine for a month. I saw a man who loves his country, who forever will carry the shame of what the IRI has done to its people. Potkin, everything you said about these diplomats is true. Jahanchahi is the European Behboudi, and we both know how disgusting he was!

Being a millionaire by itself is not a bad thing or a crime, as this article makes it sound like.

The article asks where Jahanchahi has been all these 30 years.... well, where has Mousavi and his green movement been all these 30 years? Mousavi and many of his followers have been in the power halls of the criminal system and regime which has been busy imprisoning, torturing and killing Iranians for 30+ years! They knew what was going on, and they continued working within that establishment!

The article goes on saying something along the lines of that these diplomats are men of integrity.... Oh yes? How can one make such a generalized statement? Does the author know these 30 or so diplomats to be in a position to make such a generalization? Or is it just as simple as that anyone who defects from the IRI is a person of integrity? In my personal opinion, they didn't have much integrity when they decided to work for this criminal system and represent it, while knowing of all their crimes! As I said, I'm no fat at all of Jahanchahi - but I don't like this slander of someone on the basis that he is a millionaire, his father a former minister of the Shah, and that he therefore doesn't fit the profile of being a salon-socialist/Mossadeqist/Mousavi-green-movemenist. (Self-proclaimed so called 'intellectuals')

Are you truly a thug? who are u to threaten me! I am who I am and I don't need to prove anything to you. WHAT IS YOUR OBSESSION WITH Jahanshahi? I am surprised by the crusade you have started against him. Where is your integrity? What has happened to you? Why are you so aggressive and thuggish? Are you wishing to extort money out of Jahanchahi? Is this just a ploy for money?
You speak of imposters! Is Jahanshahi whom no one knows anything about more of an imposter than Fakhravar whose ass you were kissing and who endorses your "Tork" comments. Instead of making threats or acting self righteous why don't u just concentrate on the IRI and stop spreading rumours and creating divisions.
F. Soltani

QED! If you are Farkhondeh Soltani, I am Bob Marley