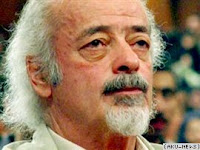 I have written many times before about the dreadful plight of Mohammad Maleki, Iran's first chancellor of the Tehran university after the revolution. This 76 year old roaring lion who has resisted all pressures against him to appear before camera and make 'confessions' or ask for forgiveness has now been charged with being a mohareb, that means someone who takes up arms and wages war against God, punishable by death in the Islamic Republic.

Maleki was imprisoned many times under the Shah and has been imprisoned many times in the Islamic Republic. This is one courageous man who has NEVER stood silent when evil has prevailed. Maleki is among the oldest dissidents to have been jailed in Iran's post election protests. He was being treated for prostate cancer before his arrest. Yet when they came to arrest him, this roaring lion replied 'I was afraid you may let me die in my bed'.

Despite such injustices against our academics and students, the likes of UK lecturer, Anna Contadini have no moral dilemma to accept an award from Ahmadinejad. An award in 'Creating Human Values' of all awards for Anna Contadini handed out by the head of the junta himself! Words fail me! They really do..
Posted by Azarmehr at 4:33 AM