Document that Proves Palizdar was Head of the Commission

Nobody can lie with such audacity as the Shiite clerics in Iran can. If you have read Iran's history of the last two centuries or followed Iran related news in the last 3 decades or like people in Iran have experienced life under the mullahs, you will be left in no doubt as to how much and how blatantly these 'lizards' can lie. It is as if God himself created a breed of evil, lies and deceit which will not only lie in your face but not have an iota of shame either when they are caught out.

Perhaps one day the US State Department and the EU officials will also realise that as we say in Persian, 'to lie for these people is as easy as drinking water', but perhaps I am too optimistic and it will take them several generations.

Today, the daily Entekhab printed a report by the government news agency, Mehr, from as far back as 3 years ago, where Abbas Palizdar is quoted several times in the news report as holding the position which the regime has denied ever existed! How could they possibly think they can make such denial when there is so much evidence from their own news agencies alone?

Tehran Friday Prayer leader, Ayatollah Imami Kashani, who was one of the 44 establishment figures mentioned in Palizdar's disclosures, implicitly defended himself by comparing himself to the prophet of Islam and how the prophet himself was often the target of false accusations by the unbelievers. 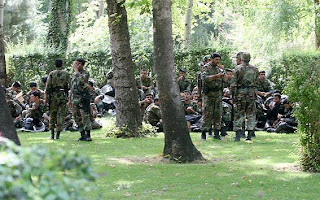 I wonder what we can do to re-direct mainstream media's attention to what's happening inside of Iran these days.

Short of massive demonstartions and bloodshed, the MSM attention is never directed to any opposition to the Islamic regime .... its not considered "newsworthy" by most of the liberal Leftist MSM - because MSMs primary agenda is their own self-involved and tendacious fight with the Bush Presidency. I expect that when Obama comes to power we will get the MSM singing the praises of the Islamic Republic and its officials to the roofs in order to allow Obama to secure a compromise with the Islamic Republic by selling out the democratic secular opponents of the Islamic Republic. The West will betray those in Iran whose values are closest in thinking to the liberal West .... but at least this time the liberal Europeans are paying for their accomodation with Islamist extreamism with the rise of that same islamisation in all European countries. The only hope for Iran is not the corrupt liberal Western media but the youth of Iran who have to deal every day with the corruption, and oppresiveness of the Mullahs ... when they have had enough and have lost their fear of the Islamic dictatorship's chomaqzans then we will see change in Iran not - not a day sooner.

Could you translate some parts of the farsi article cause i don't understand farsi. thanks a lot for your work