Does Hana Deserve 5 Years in Prison? 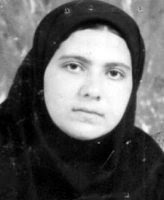 Hana Abdi was arrested by Islamic security officers in the City of Sanandaj, Kurdistan Province, Iran, on 4th November, 2007 after she left her grandfather's house. She was charged with taking part in a gathering and colluding to commit a crime against, yes you guessed it, 'NATIONAL SECURITY'. Hana was put through a series of psychological and physical tortures for two months until she was sent to Sanandaj prison, waiting for her sentence.

Last week Hana was finally sentenced to 5 years. Below is a letter by Hana's mother, Maliheh Asghari, to the women of the world:

'I have not just been Hana's mother, I have also been like a friend who has always stood by her side. Hana used to talk to me about women's rights and helping the poor and illiterate women, had become her objective. All the women who know Hana, also know Hana's objectives and her kind nature. Hana used to hold literacy classes for women and with the donations she received she would help the needy ones. After a while she set up the Azarmehr Women's Association, and many women joined up. Hana, her friends and I were always together.

Hana's friend, Ronak, who is also suffering a similar outcome, was always with Hana too. They took their first step by putting together a small library. They would go to the surrounding villages and gather women in schools and mosques and teach them how to read and write. They would also invite lawyers as guests in their meetings and they would explain to the women their rights. They held classes and workshops which taught women about the history of women's struggles and held ceremonies and celebrations on woman's day and mother's days as part of their activities.

Hana was only 21 when she was arrested, but since she has gone, I see older women who were her students, and they say to me, 'since Hana is gone, we feel we have lost our mother'.

I now know that I have only one daughter called Hana, but she has thousands of daughters who are waiting for her.

I have only talked about a minute part of the help Hana offered to the needy women in this letter, but at the end of this letter, I want to ask the women of the world,
Does Hana Deserve 5 Years in Prison?'
Posted by Azarmehr at 8:34 AM

She deserves to be called a great woman and be rewarded. She should not be imprisoned because she wants to have equal rights with others. What a sad state Iranians have to live in

They'll rape her in jail for sure if havent already.
When khamenei's HEADS, above and below, are served to his mother in ghabrestoon, we'll know justice.