The Alqods March This Year 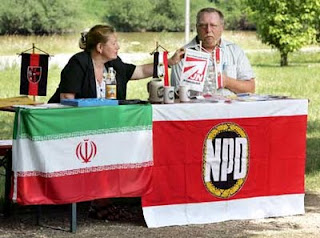 The annual Al-qods march is a publicity stunt by the Islamic Republic to rally support and credibility for the regime by exploiting the Palestine issue. It takes place across European cities on the last Sunday of Ramadan. In the last few years, Iranian expat supporters of the pro-democracy movement in Iran have staged counter demos with a clear message, 'A regime which represses its own people will not bring liberation for any other people including the Palestinians'.
The Alqods march however provokes other groups to stage their own counter protests too for their own reasons. Until last week's clashes at Birmingham and Harrow, I had not heard of the English Defence League. This year they too staged their counter demo to the Alqods march along with March for England and United British Alliance members amongst very heavy police presence which made sure the march went without incident and with no arrests. Much to the disappointment of the massive press presence I have to say, who were only interested in giving coverage to the EDL. Some even told me without any hesitation that they were hoping for violence to kick off, 'You have to bleed to lead', one of the reporters who said he was working freelance told me and another one told me 'if there is no juicy violence today, I won't get paid'.
Number of people who took part in the Alqods march this year was about a third of those who took part last year. Police estimated them to be between 350-500 people. Most of the marchers were non-Iranians who were probably not even aware of the coup government's hand and agenda in organising the annual march.
The English Lefties and the likes of Yvonne Ridley who always try hard to endear themselves to the Islamic extremists were calling the EDL and March for England members Fascists which made me laugh. Here they were taking part in a march organised by an illegitimate Fascist junta which is backed by the military revolutionary guards that controls 70% of Iran's economy, a Fascist junta which kills, tortures and rapes detainees who are arrested after taking part in peaceful protests in Iran, discriminates against Iran's citizens based on gender and religion, a Fascist junta which is even openly backed by the German Nazi NPD and DVU and they have the audacity to call others Fascists!! Case of the pot calling the kettle black or 'African American' as the politically correct trendies would prefer to say.
Amongst the UK Leftist speakers this year were Socialist Workers Party's John Rees, presumably eager to get yet another donation from unsavoury sources for his services.
Posted by Azarmehr at 1:56 PM

WoW... the whole Europe is going down the toilet hole.

Good to know numbers are down this year. Im just happy to see so many groups decide to cpunter this Middle Eastern bullshit. Never mind the media wanting violence. The EDL managed to chase these people off their top spot this year - Trafalgar Square. I gather they were moved as a result. Good.

Im still wearing my green Where is My Vote support bracelet handed to me by an Iranian girl outside Amnesty where they camped outside in protest. I watched dozens of Londoners offer their support. I very much resent reading an Iranian suggesting this great country or Europe where my family live is going down the toilet hole. Wishful thinking/hoping on your part Winston. Especially looking at Iran right now? You may as well join the leagues of Islamist jerks who want you to say PRECISELY that. It gives them a giant hard on that you think these twits stand such a huge chance.

Why i am not surprised seeing that fascists supporting fascist and fascism.

This is what is left of the stinking corpse of the Islamic Republic ... a day out protesting with Neo-Nazis oushing teh same hate agenda. BTW why is the Nazi woman not wearing a hejab?