Dictators in Middle East, Let Our People Live in Peace

Supporters of the pro-democracy movement in Iran staged a two hour demo on Friday, outside the Syrian Embassy in Belgrave Square, London. They were protesting against Bashar Assad's recent visit to Iran, where he was warmly received by Ahamdienjad's junta. Bashar Assad however went further to endear himself to his Iranian backers by stating that the recent protests in Iran were directed by 'foreign powers'. 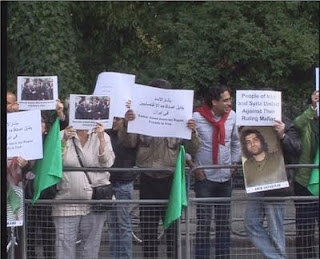 Protesters held placards written in Arabic and in English and placed pictures of the martyrs around the barricades.
Some of the slogans that were chanted on the day:
Dictators in Middle East - Let Our People Live in Peace
Down with Dictators - In Syria and Iran
Freedom and Peace - for the Middle East
Syrian People, We Love You
Syrian Regime, We Hate You
Bashar Assad, Shame on You
Murder No, Torture No, Bashar Assad Time You Go
Just before the protest started, a nervous Syrian Embassy official approached the police and said 'we were not expecting them today!' No one from the Syrian embassy opened the door at the end of the protest either when protesters asked an embassy official to receive their protest letter which explained why they were protesting.
Although Arab media gave coverage to the protest, See: [http://www.aaramnews.com/website/64783NewsArticle.html] once again I was dismayed by our Persian language media. VOA Persian reporter who was supposed to cover the protest rang and said she couldn't find the place and asked if one of the protesters could take her to Belgrave Square. When she did finally arrive, there was no cameraman with her. 'My camera man couldn't get a permit' she said. She ended up standing at a distance and just watching!
Posted by Azarmehr at 10:15 AM

Well done for all your efforts; shame you could not get more coverage.

Can we do the same thing outside Venezuelan Embassy?