I See Nothing but Splendour in These Chains 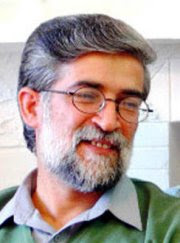 Hojat-ol-Islam Ahmad Ghabel was on his way to the funeral of Ayatollah Montazeri when he was arrested in Mashad. After seventy days of being incarcerated in the Intelligence Ministry Bureau of Mashad, he was taken to the quarantine wing of Mashad's Vakil Abad prison.

In a brief contact he was allowed with his family, Hojat-ol-Islam Ghabel told them, they took me to the Revolutionary Court while my hands and feet were chained. I told them 'You intend to humiliate me by putting me in chains but I see nothing other than splendour in this'.

Although Ghabel's house and passport have been confiscated by the Special Court for the Clergy, the SCC refuses to conduct his trial saying it does not even recognise Ghabel as a valid clergy.

Truly this Green Movement is an epic of resistance against tyranny in which all its adherents whether academic, worker, artist, writer, clergy or whatever part of the Iranian society they are from are making legends that will be remembered forever by Iranians in the next generations.
Posted by Azarmehr at 8:24 AM

Well as we all know, the current 'Dark Mullah' regime has lost the hearts and minds of the youth, the intellectuals, the artists, and the Mother's and women of the nation. Only those who think that a 'Supreme Ego' who get's paid billions just to have his hand and arse kissed, still glorify the shameful sham of HIS type of Religion in politics. But again in a way I thank Khamanei. The hypocrite who stuffs away his very God-humbling wealth - HA - in International banks at the expense of his people. That debase tyrant who's corrupt greed thinks of his people as nothing more than his plaything puppets! Yes, a very well done Khamanei! You've well and truly put a tear in the 'Republic's' flag! I just hope it only takes months instead of year's before decent Iranian's put you in the dock and truly enjoy the Islamic Reformation that YOU yourself started! So put that in one of your £200,000 odd pipes and smoke it!

The interesting thing is the continual promotion of the lie that the green movement is associated only with unhappy rich kids in Tehran. The fact the regime continues to imprison people from across society, itself is a counter argument to their own propoganda. Whatever way you look at it, this regime is facing a losing battle on all counts.

Yes, amir, the IRI will collapse. You are right!!!! (sarcasm off)

idiot, the Iranian government has the broad backing of the people. Just because koshkeshes like you don't support it all the way from the UK, doesn't mean Iranians don't. STFU traitor.

SZ you sound like a broken record. Blah blah blah. Funny you call me a traitor, when it's your regime that turns on it's own people, founders of the very regime you support, allies of your (fake imam) Khomeini. Your regime are traitors, the IRGC are the traitors not me. You can't say anything against the official line without being called a traitor in Iran. And you think the way your regime operates is democratic. You're delusional. Fuck you, fuck your rahbar and fuck Ahmadinejad.

SZ, you are another intellectually challenged internet troll who is on the "bacheh koun" payroll. You and your masters are DONE. We are coming for you and will not show any mercy. Revenge is a cunt my dear peasant.

Now, you need to STFU you wanna be Arab.