The Insanity of Islamic Republic Judges 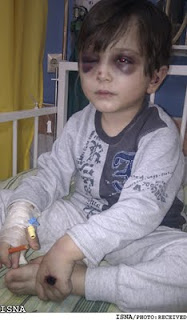 When you are primarily monitoring Iran's political developments, it is easy sometimes to forget the non-political activist victims of this evil regime. Iranian websites reported on Thursday the 4 year old Nima, severely abused physically by his brutal parents, was handed back to his father by an Iranian judge.

The report said: "Nima is a four-year-old boy in Tehran and the second victim of child abuse [who received media attention] in the past month. Yesterday, and only ten days after he was taken to the Mofid Children’s hospital, he was released and delivered to his abusive father."

"Nima suffered injuries from severe beatings from his parents who burned various parts of his body including his genitals and caused deep bruising around his eyes. He was transfered to the hospital on May 8th. Upon arrival at the hospital, Nima told the staff that his father had burned his body," said the report.

Of course, sadly, the despicable physical abusive of children happens everywhere but where do you find a judge who hands over a victim of such savage abuse back to his abusers and yet a devoted mother like Nasrin Sotoudeh is taken away from her children and jailed for 11 years? Where in the world would you find a penal code like this:

"According to paragraph 220 of Iran’s Islamic Penal Code, if the father or father’s father kills his child or grandchild, he will not be punished for murder. Physical punishment by a parent is permitted in Iranian law."

My heart goes out to this little boy who has to suffer the consequences of a mad generation who brought about the 1979 Islamic revolution in Iran.
Posted by Azarmehr at 4:15 AM

Someone must rescue this child. Are there groups who care for abused children in Iran? Can he not be adopted? My heart is breaking over him!! ;((

It breaks your heart. The psychological scars already written into Poor Nima's battered and bruised face. 1390 is the Islamic Iranian year. And yep - the IRI judicary certainly do their best to re-inact that brutal medieval year don't they! Same said with their metaphorical burning at the stake and Witch-Finder General politics! Again, such cultivated meglomania of the mafiaso mullah state deserves the padded cell. But hey - the divisions between the Khanmanei cut-throats and the Ahmandinejad thieves continue. With luck, the whole squalid reprehensible system of thugs and tyrants will soon implode!

Last part would be more specific by saying: "Physical punishment is permitted by Islamic Sharia -- which is NOT culturally Iranian -- law."

in the vanguard said...

Face it, with Iran’s Islamic Penal Code or without it - it's a sick culture. Pedophilia, rape, murder, mutilation, trashing women, torture, back-stabbing, immolation ... islam is rotten to the very core.

We need an NS revolution, now.

Some sources say that Nima has died from the abuses after being returned, but I can't get a clear source. Can someone let me know if they find anything out?