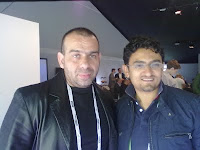 When Iran's state TV and its English speaking channel, Press TV pined at the brutality of Mubarak's regime, it was rank hypocrisy at its best which was rubbing salt on our wounds.

So when a photograph of Wael Ghonim, the Google employee and one of the pioneers of Egypt's pro-democracy protests, showed him wearing a green wrist band, we were all hoping that he was wearing it in support of the Green Movement in Iran. We were then told Wael's wrist band was to raise awareness about the victims of the flood in Pakistan and so our hopes were once again dashed. The wrist band he wore was neither to do with Iran's Green Movement nor with Pakistan's flood, it was coincidental, but Wael Ghonim did make the following statement:

“I would tell Iranians to learn from the Egyptians, and we have learned from you guys that at the end of the day with the power of people, we can do  whatever we want to do.  If we unite our goals, if we believe, then all our dreams can come true”

As I wrote back in February, with this one message of solidarity, Wael Ghonim, destroyed all the efforts made by the Supreme Leader's regime in Iran to hijack the Egyptian uprising. It was a huge moral boost to the Green Movement in Iran and energised the protests which then took place in Iran on 14th Feb, where people's main slogan was "Mubarak, Ben Ali, its your turn next Seyyd Ali (Supreme Leader)"

Today, I had an opportunity to meet Wael Ghonim at Google's Bigtent event in person, to thank him for his support of Iran's Green Movement and make him aware how important his message of solidarity was.

I don’t believe you are a well informed person. Further more, your arrogant and aggressive nature will get you nowhere. For your information Wael Ghonim/Toni Cartalucci writes for PressTV. He does not support the green movement. This shows how unprofessional you are creating false information you moron.

At the time I took this picture, I told him I support the GM and asked him if he was happy to take a picture with me in support of the movement and he did. He worked for Google at the time. Show me the link that he works for Press TV and I will beat the crap out of him next time I bump into him