It has not been a good week for sycophants in Iran. The ongoing rift between Ahmadinejad, who wishes to choose all his ministers himself and the Supreme Leader who is determined that he alone has the authority to appoint key cabinet posts has caused major confusion amongst those who usually choose their masters based on which one offers better cheese and wine.

Below is a picture of one such sycophant published in the Iranian daily, Alef, wearing a T-shirt with Khomeini's picture: 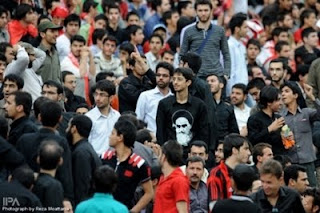 Same fan after he was hit over the head with a truncheon by law enforcement forces: 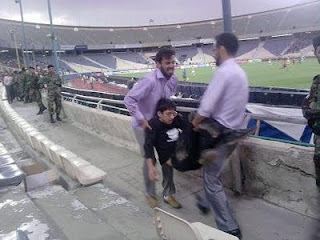 The pro-Khamenei camp have also arrested 25 people close to Ahmadinejad's favourite cabinet member, Rahim Mashaei. Those arrested include Parivash Fatemi, who was so full of praise for the Supreme Leader in the conference attended by Islamic Republic's stooges in London, at the Millenium hotel last year.

Idiot. How does that make you any better than the thugs that beat up people for no reason?