Today, A Nation Mourns One its Favourite Sons 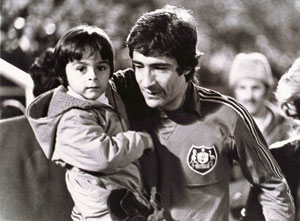 "They tell me not to get angry. Do they think I have no pride and expect me to be indifferent to the pains and sufferings of my people? They are imposing subsidy payments and people's living conditions are getting worse, not better, serving people means bringing about their welfare and comfort, but sadly we are witnessing the hardship and poverty of our people. The government says we hand out $40 a month to everyone, do they think the people of Iran are beggars? People of Iran are sitting on top of oil and gas treasures"

These were some of Nasser Hejazi's last words before he passed away on Monday after his final battle with lung cancer. Nasser Hejazi was Iran's legendary goal keeper in the 70s and Iran's first goal keeper to play in a World Cup. Twice, he was part of Iran's national team which won the Asian cup in 1972 and 1976. He has a total of 63 caps to his name playing for Iran's national soccer team. His last game was in 1981, when the Islamic Republic came up with a ludicrous plan to retire the football players who played in the national team before the 1979 revolution. According to this plan that became known as the '27 year olds plan', players over the age of 27 could no longer play for the national team. Hence Hejazi had to retire at the age of 33, a goal keeper's prime.

Hejazi was also a successful coach and won the best Asian football coach award in 1998. In 2005, he tried to run for president but was disqualified by the Guardian Council. Most of all however he will be remembered because of his goal keeping and that he stood by the people of Iran against the injustices of this regime. He was a proud man, when he was first hospitalised, the regime made out to have helped Hejazi with his medical bills but he denied this and said I will not take a penny from them, I will sell the carpets in my house if I have to and recited this poetry verse:
"I am that proud petal who will go without water
But I will not lower myself to beg for a drop of dew"

In his very last interview, he quoted Gandhi and said "My pain is not loneliness but it’s the death of a nation who considers poverty as contentment, incompetency as patience, and with a smile on lips, consider this naivety as destiny.”

Today, thousands will take part in his funeral and millions of Iranians will mourn the nation's legendary goal keeper who never abandoned them.

I followed the link. So handsome! May he rest in peace.

you r great potkin.
I enjoyed your debate with Haleg afshar.
you were right she couldnt

Sadly, never heard of the guy. But when a YouTube posting recently showed a metro train full of people chanting it's the Regime that has died rather than Nasser, then this ultimately proves that the regime is both on borrowed time and ultimately on the wrong side of history. Anyone who defends it now are most surely just the lackey's of immoral injustice, deliberate medieval ignorance or most likely - just a part of the group thuggery only interested in protecting their debased cosy places of money and position! Man-made Religion can be used to excuse all crimes of man and his sins!

P.s. I got replies to old posts from our ol' pal Reza still wanting to fly the flag of the interally battling IRI regime. in REPLY to him, all I can ask is this? What exactly is SO great about a medieval theocratric tyranny? What is so great about an Isamic Gestapo like the Basiji? And what is so great about a dusty egocentric old man in Khamenei declaring himself the voice of God when on Earth he's commited a mulitude of state sanctioning crimes against humanity. PLUS lives in the Shah's old palace! Reza accuses me of not visiting Iran. Wrong! I have friends I HAVE visted in Tehran. Piza deliveries a way to get booze. Paid off temporary brides as a quick way to get sex. Drugs as an excape from povery and the growing unemployment stuation? Need I say more? In other words gross hypocrisy and gross mismanagement under a political system infected by the false sham propriety of religion is what the IRI really is! IT'S THE TRUTH! A truth that the paid off blind-sided propaganda in the like's of Reza and Press TV either choose to ignore or pretend that it doesn't exit! But again - hey - time is fast running out for the pious thugs of the IRI. Already the excuses are being formulated to protect themselves from the ultimate wrath of the people!