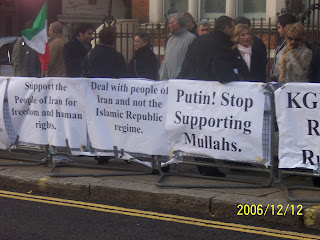 Iranian ex-pats staged a picket outside the Russian embassy in London today; to protest at Russia's continuous support for the Islamic Republic and the inhumane treatment of Iranian refugees in Russia.

Iran has suffered continuously from the unwanted interference by her northern neighbour in the last two centuries. Many of Iran's provinces were annexed by the Tsarist Russia, in line with their expansionist ambitions of reaching warm waters of the Persian Gulf. The Russians opposed Iran's constitutional revolution by siding with the despot Qajar king, bombing the new parliament and killing thousands of Iranian freedom fighters.

After Iran's occupation in the second world war by the allies, the Russians and their puppet installed government in Azarbijan refused to
leave the Iranian territory. Throughout the second half of the 20th century too, the Soviet backed Communist Tudeh Party, kept destabilising the country and served faithfully its pay masters in the Soviet Politburo.

Since the establishment of the Islamic Republic in Iran, the Russians have been close allies with the clerics in Iran, both during the Soviet years and the neo-KGB era.

Today coincided with the anniversary of the liberation of Iranian Azerbijan from Russian occupation after the second world war. Iranian ex-pats chose today as an appropriate occasion to stage a protest picket outside the Russian embassy in London to condemn Russia's continuous support for the clerics in Iran and the mistreatment of Iranian refugees.

Interestingly, the Russian embassy refused to accept a letter and a petition by the organisers fearing that the papers may be contaminated! This by the way is not a joke, they really refused to accept on the grounds that the papers may be contaminated. The Persian proverb comes to mind "The evil doer thinks everyone is like him".

Thank you for the a bit of history lesson. Most excellent.

It is both a great job and a bit of a history lesson. I liked them both. :)

..and Russia's connections to Hezbollah and how Iran opened the East Africa market for Putin:
http://www.axisglobe.com/hezbollah4.htm

I salute the people who organised and attended this demonstration. (I could not attend.) Its about time that we voice our concerns and highlight the duplicitously and dangerous way that the Russians have played politics with Persian people and taken advantage of our internal social and political problems and inflicted untold harm to the integrity and independence of our sovereign country. Due to their proximity to us they have not wasted a day in the last 150 years to take advantage of our counties weakness to take away our land, our wealth and subvert our young and educated students to become traitors to their own Motherland. Even recently they have been trying to take most of the Caspian sea from us.
NO MORE WEAKNESS. WE WILL CONFRONT ALL THOSE WHO HAVE EVIL EYE ON OUR COUNTRY AND WILL DEAL WITH THEM STEP BY STEP WHENEVER AND WITH WHAT EVER MEANS AT OUR DISPOSAL. (They will have to poison and nukes us all to stop this resurgence of Persian Pride and resolve.)

Dear Potkin,
In the last 35 years, since the late Mohammed Reza Shah was diagnosed with having cancer, the conspiracy of the Red and Black has taken a seriously dangerous dimensions to itself.
First the Left and the Russians inflicted the opium of the masses (Religion) on us and when that wore off, made 4 million young Persians addicted to the real opium so that they be docile and not know what is going on.

Oh, deliver us from the liars and those who have evil thoughts about Persians.

Dear Amarmehr,
Great post. I wrote about this and your post after reading about it at Winston's. If you would like to read it, it is called, "Iran Azerbijan Liberation from Russia. Have a great day, and keep up the good fight.