It was good that the protests against president Ahmadi-Nejad yesterday, got some worldwide publicity. In fact a Google news search showed more than 150 related articles. For me however, the most striking picture from the event will be the one below: 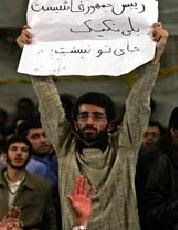 The simple placard held up by this brave Iranian student, says:
"Fascist President, the Polytechnic is not your place"

Its not just that he is standing up to an intolerant and dangerous man; one has to remember that the majority of the attendants were pro-Ahmadi-Nejad baseeji students, shipped in from Imam Sadeq and Imam Hossein universities.

I just hope this picture will not land this student in a similar fate to that of Ahmad Batebi, and what happened yesterday will not be used by the Islamic Republic to justify another more heavy handed crackdown on the universities.
See more pictures: 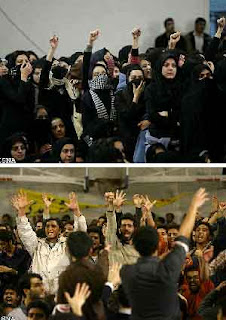 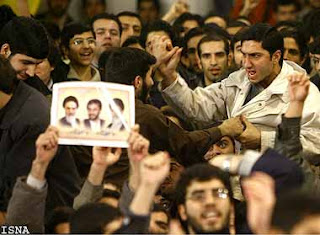 Fox News, CNN and BBC covered it which is good

Interestingly enough, at the protest yesterday at Tehran University, a student got up above the crowd like this man and burned a picture of Antarinejad, to which Antarinejad directly addressed the protesters who set fire to his picture:

"It is my honour to burn for the sake of the nation's ideals and defend the system...Americans must know that even if Ahmadinejad's body is burnt a thousand times for this purpose, Ahmadinejad will not retreat even a centimetre from these ideals."

Well, he's certaintly aware of this man's actions so let's hope he does not share the same fate as Batebi indeed. I think becuase these articles were so widely circulated and covered however, and the pictures recognized, imprisonment or torture of these protesters would draw much unwanted attention to a regime and man who just gave a speech about the Islamic Republic, the "champion of human rights and free speech".