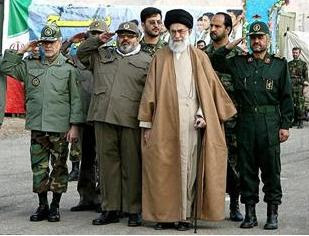 Sazgara is the founder of the revolutionary guard. Revolutionary gurard start killing people from the day started. First they attack SanandaJ in Kurdistan in March 1980 then they attack Kurds in Summer then they massacare people in Turkemanestan. In 1982, after the removal of Bani Sadr, they arrested and killed many people in demonstration against Regime. Later they were involve in arresting people under the slogan that they are fighting US spy and Iraqi spies. They sent thousands of children over the mines with the key to Heaven for the stupid war which Khomeinie wants to capture Gods from Bagdad. Sazegara try to milead people. He wants to cover his past by washing the blood from the hands of revolutionary gurds when he was the commander in chief. Secularism cannot be brought to Iran by this murderes.

No of course not, it can ONLY be brought about by anonymous commenters like you, who have been secular revolutionaries since birth and have never done anything wrong in their entire life!

If you dont like Sazegara then you should do more than he is doing and capture the hearts and minds of people to accept you as their spokesman otherwise just sitting in the toilet and saying so and so is no good won't get you far.