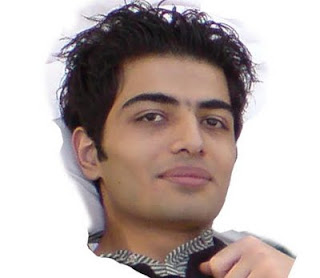 The number of death sentences announced by the Stalinist show trials in Iran has now increased to five. The names of those to be executed by hanging are Mohammad Reza Ali Zamani, Arash Rahmanpour, Nasser Abdolhosseini, Hamed Rouhinejad and Davood Fardbacheh.
More information about the above reveals that at least three of them were not even arrested during the post election protests. Mohammad Seifzadeh, the defence lawyer for Hamed Rouhinejad, see picture on the left, has revealed that his client is a student of philosophy at Beheshti university, he was arrested forty days before the election results were announced and suffers from MS.
As yet I can not find anything on the websites of Reprieve or Human Rights Watch about the latest death sentences in Iran. Representatives of Reprieve and Human Rights Watch regularly appear on Press TV which is funded by the Supreme Leader of the Islamic Republic, but never talk about human rights abuses in Iran.
Posted by Azarmehr at 7:39 AM

Quite clearly they are stooges of the Islamic Regime.

HRW represents a bunch of Saudi-sponsored, Nazi paraphernalia fetishists who are in bed with the Mullahs. This is what happens when serious, conscientious organizations get hijacked by political radicals.

They also had this on their Press page:

I'm planning the shout at Reprieve; will update you in due course.

Sohrab, you are a partisan fool of vast proportions. God damn you are so ignorant. HRW provides an invaluable service to people who need it - LIKE THE PALESTINIANS.

They are not an Iranian organization. And at this moment who do you think requires more public attention: The food-deprived (and not to mention school supplies) Palestinians or Iranians? Our situation is not as dire as theirs, but even though I still believe they should cover it.

It's a messed up world when a special-ed teacher denounces a non-profit human rights organization.

You are worse than the SZs out there.

Lets just have a look at teh front page of HRW website as it stands today, it covers Morocco, USA, Georgia, Kazakhistan, Honduras and Indonesia and I suppose you think the people in teh above countries are all more desperate and needy than you rown people. So your own people must be right at the bottom o fthe pile of priorities. WHat a shame.

Can you write a list of your priorities, so obviously Palestine will be the top and then lets see where Iran falls in your list

The whole point of an HRW or AI is to be an objective monitor of global human rights is to raise awareness of all kinds of violations across the world in as objective way as possible.

It seems like HRW is deprioritizing Iran in favor of other situations, which tend to resonate more strongly with certain segments of the Euro-American Left. Still more troubling has been the recent revelation that their leadership promised the Saudis more condemnation of Israel in return for funding. Even more disturbing has been their placid response to the revelation that the person who mans their Israel-Palestine desk also happens to have a fetish for Nazi leather jackets, medals, and other memorabilia.

I applaud any human rights organization that documents the plight of the Palestinians. But this isn't the "oppression olympics" and some people's plight should not be prioritized over others' if we really believe that we are talking about HUMAN rights here. The editorial decision made by HRW to keep quiet about Iran discredits even the good work that they do vis-a-vis Palestine or anywhere else people's fundamental rights are trampled on.

You clearly misunderstood my point. And like i said, this was on their front page:

this is to do with the execution of the juvenile, how can HRW possibly not have one reference to the death sentences in the unfair show trials?? Imagine if this had happened in Israel, it would be all over their website

barmakid,
I really do not believe you when you sign "peace". We all know that what Sohrab says about HRW is the truth, and nothing but the truth. Take all human rights violations in Iran, change the country's name to "Israel", and imagine what will HRW do with all this.

"Iran should immediately free seven detained Baha'i community leaders, or bring them promptly to trial so they can defend themselves in fair and open proceedings against the serious charges against them, Human Rights Watch said today." (May 14, 2009)
Now, calling Iran to bring innocent people to trial while knowing what kind of trials take place in Iran - This is EVIL!

Please check this video on this issue: http://www.youtube.com/watch?v=I9Jh2n7DqYg

Despite your special talent of belittling the plight of the dispossessed throughout the world with detached phrases like "oppression Olympics," I will respond to you (and shariat) seriously.

First, HRW has limited manpower and resources like any non-profit group does - this poses limitations on coverage.

Second, the Israeli-Palestinian conflict has been raging for more than 50 years now and has displaced, impoverished, and yes, oppressed millions of people. Furthermore, there currently are millions of Palestinians (children and women, not just Hamas) that live in an open-air prison and are consistently denied their human rights.

Now I know Iranian nationalism has permeated your mind to the point that not a semblance of objective intellectualism exists, but try to understand your hypocrisy. You yelp unhinged right-wing terms like "oppression Olympics" when it suits your ideology, but hey, you wouldn't belittle jonbesh-e sabz by including it in the "oppression Olympics," would you? No.

In fact, your smug choice of words in describing human plight makes you sound just like an IRI propagandist trying to discredit the opposition (same hollow tactics.) So what if the Saudi gov. helps them financially, the U.S. gov funds Israel somewhere to the tune of $36 billion a decade (which is how they rationalize it.)

I don't like the Saudi gov. either, but the child without food
takes precedent in my mind. Have you ever been hungry and not had anything to eat? Have you been in a situation where other "privileged" kids are going to school around you but you can't go because there is no school for you to go to, or school supplies for you to use? No, you haven't, because if you had you would never use a smug phrase like "oppression Olympics."

You represent the worst kind of people throughout the world. Blinded my nationalism and an unhealthy distaste for political correctness you struggle to see the truth.

You belittle those who blame others and claim oppression, but yet somehow when you try to prove a point you are nagging or blaming someone (whether it be Trita Parsi or political correctness). Your ideology is laden with hate and blame, but you have the audacity to denigrate those who dare to bring up the very real effects of imperialism.

I am not a nationalist, my allegiance is to no nation - it is to the progression of the human race. Nationalism causes wars and, in your case, warped political ideologies.

While I support my ancestors in Iran, I will never let that support blind me to the realities of international affairs and to the exigencies of the downtrodden.

p.s. Though the I/P conflict has become vapid in our minds, with every new birth in that region it becaomes a brand new reality.

Wow it's true you treacherous little douche bag, you love so many others before your own people.

barmakid,
--"So what if the Saudi gov. helps them financially"

If you are not able to understand "so what", you really do not deserve any further answer, no matter which morality acrobatics your miserable mind is involved in.

I just tried to post a long response debunking your comment argument-by-argument Barmakid. Unfortunately, my connection got suspended just as I was about to publish. I won't attempt to retype.

But I do retract my previous comment. It was uncalled for.

Thanks for retracting your comment, but no worries, I don't take offense to it. But if I may say, such comments are uncharacteristic of you. I feel like this is a recent development. Either way, even though your political ideology is quite different than mine, and all I have to judge you from is your writing, I am confident you're a decent person. (And honestly, the "trita parsi's jizzrag" thing did make me smile).

But about your Saudi comment, maybe I wasn't clear enough, but I put in parenthesis "that's how they rationalize it." Which meant, this is how HRW thinks about obtaining funds from the Saudi government, not me. And furthermore, even though HRW receives funds from one of the most notorious abusers of human rights (Saudi) it still does not fail to criticize them and highlight their abuses when the time comes.

AS a non-profit, funds are hard to come by - so you get them how ever you can, legally of course. I have worked for non-profits and the type of people that work there are uncompromising when it comes to their scruples - after all, they work for a non-profit! They are motivated people and 99.9% of them cannot be bought (there are always some bad apples).

And about debunking my argument, I really wasn't making an argument - I was simply giving you my point of view, which was really a response to they way you guys criticized HRW.

WE clearly disagree, which is a product of our diverging ideologies. I am a progressive liberal, and you, well, let's just say you're not:))

But hey, if you decide to retype - I'll respond.

p.s. Neoconservatives/realists have been and still are funding the Saudi government, the Egyptian government, and the Pakistani government amongst others. It is incredibly insignificant that HRW receives funds from Saudi when you look at the big picture.

And while they fund these human right abusers, they pay lip-service to spreading democracy and human rights - surely you recognize the hypocrisy.

Yet, instead you focus your wrath on a puny organization like HRW, when the real problem is that OUR government "chooses the order and certainty of petty despots over the uncertainty and chaos of developing democracies."

If I sound more irritable and aggressive it's because the stakes are that much higher now. Before the uprising, I could afford to pontificate and just engage in good faith debate. Now the political divisions and objectives have become much more crystal clear. So I think if I'm going to spend my time blogging, I'm going to make sure that I'm either winning support for the green movement or resolutely opposing its detractors.