The Audacity of this Little Dictator 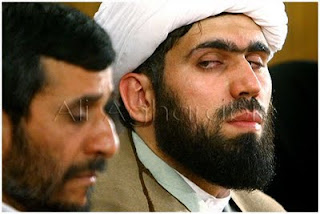 Mahmood Ahmadinejad, the head of the coup government in Iran, spoke at the Friday Prayers sermon today before the main Friday Prayer Leader, the newly appointed Ayatollah Kazem Sedighi began his sermon.

After weeks of denial that any human rights abuses had taken place in the post-presidential elections fraud, Mahmood Ahmadienjad blamed the atrocities of the attack on Terhan university and the horrors of the Kahrizak detention centre on the pre-written scenario of the 'enemies'!

'...during these incidents a group of people were hurt and the events turned very bitter, some attacked the university dormitory and did some ugly things. In the detention centres some immoral things took place. I want to say here and now that what happened in the detentions and in the university was the enactment of the enemy's scenario. These things happened by those who want to overthrow the regime. We have clear evidence and documents that prove the esteem of our revolutionary, security and law enforcement forces is unblemished from these shameful actions. Our beloved Baseej members sacrificed themselves to be beaten up but they were still careful people's rights and properties were not harmed. Our Baseej were beaten up but they did not raise a sound. Be certain all these crimes were carried out by the enemy's infiltrators'

Look at the way the cleric sitting next to Ahmadinejad is looking at him; even he can't believe the audacity of this little dictator.
Posted by Azarmehr at 9:12 AM

Either he is very, very stupid; or he is a very bad liar. I think both, perhaps.

I see signs of Khamenei's waning power here. Only yesterday he recommended that the authorities stop demanding Karrubi and Mousavi's heads. Now Ahmadinejad says the exact opposite...

Ahmadinejad is one of the most disgusting, filthy sadistic, piece of shit lying men ever in history of Iran. His turn will come soon and he'll burn in everlasting hell forever!!! Long live the Iranian people. Long live freedom.

LoL... what a scary photo