Pictures from the Fourth Session of Stalinist Trials in Iran

The evil looking Judge presiding over the show trials: 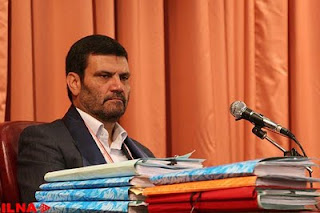 No one can believe the absurdity of the show, even the young policeman 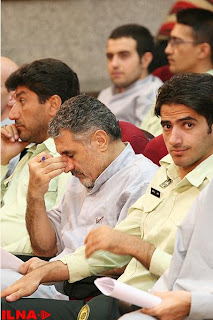 Ahmad Zeidabadi looks on. His wife claimed they had tortured him to the point of Zeidabadi losing his sanity 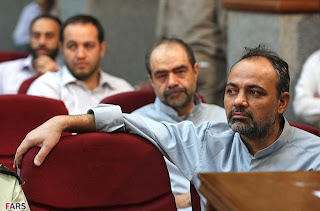 Look at Behzad Nabavi, former speaker of the parliament and Industry Minister in Moussavi's cabinet during the war with Iraq. It was hard to recognise him at first from this picture. In 1972, as a guerrilla fighter against the Shah, he was arrested and tried to commit suicide by taking a cyanide tablet. Could he even imagine at the time what laid ahead? 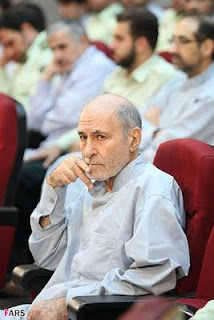 I don't shed a tear for Nabavi, nor do I believe in Karroubi or Mousavi they are all creatures of the dark. They approved of the thousands of crimes small and large committed by the Islamic dictatorship. They are part of Iran's problem and not the solution nor should they be considered they part of Iran's future.

Iran will only be free when all these criminals including Karroubi and Mousavi are thrown out of power and brought to justice for their manifold crimes.

You may not belive eit now but IRAN WILL BE FREE and it will be sooner than many here belive possible.

So Rostam who should lead in Iran now? Who do you have in mind? Do you think anyone else can do what Karroubi is doing? As for yourself you are so scared that even outside Iran you can't reveal your identity or come to the demonstrations.

'Rostam' is right I'm afraid. There are two points here: firstly there is no one within this regime who's capable or willing to lead Iran into a post-Islamic republic future.

They all owe their positions to this regime and will not risk losing their privileges which will inevitably happen if they were to subvert the system.

Secondly, no 'democratic secular Iran' can be born out of a cruel theocracy. It just cannot happen. What the reformists will do, assuming they will ever get anywhere near the seat of real power, will be to tinker with the regime just to make it a little more palatable to the outside world, whose investments they badly need. Iran will end up a kind of Pakistan Lite. That is NOT what we want.

Let me know who else inside Iran has the courage to expose these rape crimes, and I will commend him/her.

Kharoubi has the courage to expose these crimes.

Men can change after doing "evil" and they can do good. I do see Kharoubi as one capable of doing good.

It is all very well people throwing out these charges about who approved crimes against the people, but they do not provide the evidence to support their statements. Those crimes were signed off by?.....

Azarmehr I am afraid here I must part company with your line of thought. You can either be against this regime root and branch or are only looking to reform it. You ask who else within Iran can speak liek Mousavi and Karroubi can. My answer is NO ONE. That is the point. These criminals are part of the system that represses the people of Iran in the most cruel ways imaginable that is why they are allowed to speak out. Dont disgrace yourself now azarmeher after all that you have done.