Show Trials in Iran and the Hypocrisy of Stop the War 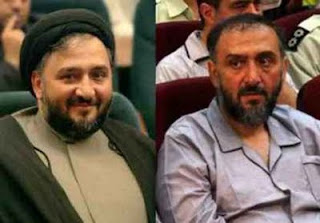 Haven't had a chance to update the blog with any posts since Friday, yet so much has happened that needs to be told.

Most pressing item is the show trials in Iran. The accused are brought in to the courtroom in their pyjamas looking gaunt and as if they have not slept for days. Any reasonably intelligent person can just take a look at Abtahi and imagine what he has been through for the last 40 days. It doesn't take a rocket scientist to realise how the coup masters are applying the Stalinist techniques they have learned from their Russian and North Korean friends. No one takes the statements made by Abtahi and Atrianfar in court as genuine, nevertheless the show trials should not be underestimated. They are a show of strength. The coup masters are telling the population, look how strong we are and look at what we can do to you.

And just look at the hypocrisy of SWP's scumbag Lindsey German. Here she is representing the Stop the War Coalition in campaigning against the show trial of Egyptian trade unionists http://stopwar.org.uk/content/view/691/27/ yet when Stop the War were asked by a newspaper reporter friend of mine why they are not condemning the show trials in Iran, their reply was 'Iran is not at war'. So was Egypt at war when Lindsey German handed the petition to the Egyptian embassy in London?

These dinosaurs - Lindsey German looks like a dinosaur as well as think and act like one by the way - have a one way ticket for issues and agendas. They care not about human rights, injustice or the truth, they have their political agenda and that is it.
Posted by Azarmehr at 2:56 PM