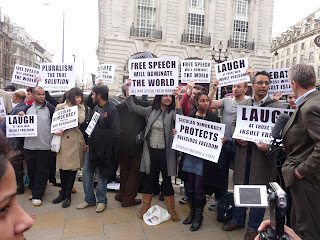 UK's secular Muslims today decided to stand up against the Islamic political extremists, the Al Muhajiroun, who call for the abolition of democracy and imposition of Sharia Law in Britain. And guess what? the Al-Muhajiroun decided not to show up!

The Iranians who showed up today to support the secular Muslims also explained the forthcoming 4th November protests in Iran. Hopefully many people from today will stand in solidarity with the Iranian people and the Green Movement on Wednesday, outside the Islamic Republic Embassy between 6-9 pm. Lets show the world that the Green Movement is alive and moving forward.
Posted by Azarmehr at 11:09 AM

After living in London for 4 years i have noted that Muslims tend to be a lot less integrated in british society, thats partly because of UK Gov't's multi-cultural/immigration policies. So you tend to see allot more extremist tenancies. Couple that with "Muslim ghettos" up north you get a breeding ground for extremism.

I am very happy that muslims can also be secular and tolerant, even if the media constantly focuses on the extremists. Thank you... Thank you, that means a lot to me...