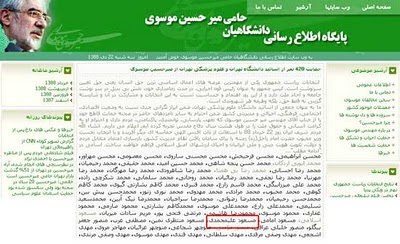 When the regime tried to blame the assassination of Iranian physicist, Massoud Ali Mohammadi, on the usual bogey figures, the MeK and the API, they seem to have forgotten one thing. His name clearly appears amongst the 420 academics who publicly backed Mir Hossein Moussavi, see the image left.

My guess would be this is yet another extra judicial execution of pro-Green supporters committed by the terror squads who have  publicly claimed their formation. Like this one here: http://u313.blogfa.com/post-126.aspx

In the above link, a terror squad called Shahab Sagheb [Penetrating Meteorite],  whose hero is no other than Navab Safavi, the leader of the notorious terrorist group in the mid 40s to 50s, the Fedayean of Islam [Devotees of Islam], who carried out a series of assassinations against Iran's intellectuals, researchers and statesmen, publicly claimed their formation and gave seven days warning to the judiciary that if the pro-Green supporters are not executed they will take the matters into their own hands. I would have thought they should be the first suspects.
Posted by Azarmehr at 2:25 AM

Only the government would have the resources to plant such a sophisticated and devastating bomb. They can't remove the main opposition figures such as Mousavi and Karoubi, so they are going for the lesser known opposition figures such as this innocent scientist who was supporting the student movement.
Such a waste of a highly educated man who had spent years teaching our young people.

He is either a neocon in disguise or in the pocket of the IRI:

His official website is called "Race for Iran". I find that very odd. He is up to no good. Please leave him a comment on his propaganda.

I have a hunch he was planning to defect.

You're such a lackey of the Brits!

At least be honest with your posts.

The Iranian Royalists in LA have admitted they killed the guy, and you claim it was the IRI? Seriously? Is this the level you will stoop to in order to further your cause?

At least post the truth, not just half truths to further your cause.

First of all API are a bunch of lunatics who admit anything to make out they have supporters in Iran. On this instance however even API denied it and said teh website that took responsibility for this was run by the Iranian intelligence. Even Fars news removed teh news after it was discovered the website was not the API official website. But then again you can't read Persian so you wouldn;t know about these things.