Saddam's forces killed his brother but Moussavi's nephew, Ali was saved to become a martyr in another battle for the liberation of his people. Now while pro-Saddam sychophants like George Galloway, earns £8000 for each of his appearances on Press TV, our war veterans are assassinated in the streets by the messianic Hojjatieh junta's death squads. 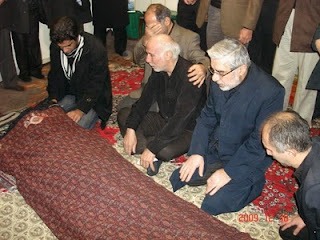 Azarmehr stop trying to lionize Mousavi. He was part and parcel of the criminal regime that you ostensibly oppose. he will in time have to be answerable for his part in the innumerable crimes of the fascist Islamic regime. It is a shame that his nephew has been killed? But his neophew is just another victim of teh evil that Mousavi helped bring to Iran - NEVER FORGET THAT!

When the Fascist Islamic falls no one will remeber Mousavi and Karroubi.

When you show more courage in the freedom and security that Britain provides then I will take you seriously until then you are no more than a cyber Avatar to me.

I maintain my position, right now there is one line that divides us, are you for the coup or against? If we dont maintain this broad front it will be you and a few more Avatars on the cyber space

Maybe Mousavi now understands what it's like to lose your family members to this fascist regime...something he was actively involved in from 1981-1989...